Showing posts from April, 2016
Show All

WE LIKE TO WATCH: EPISODE THREE - CAPTAIN AMERICA: CIVIL WAR 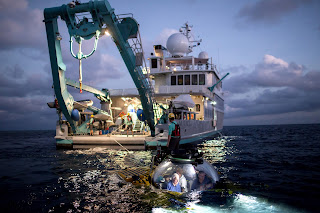 A lot of people are getting excited about VR, and rightly so. With the first wave of consumer grade headsets hitting shelves, after much waiting it looks like 2016 will finally be the year of VR. With all this VR hype being thrown at us by the gaming industry it's easy to forget about all the other exciting applications this new technology has to offer, such as educational applications. This is where David Attenborough, the man that introduced so many of us to the wonders of the natural world, comes in. The world famous naturalist, who turns 90 this year, has teamed up with Alchemy VR to create two breathtaking VR experiences, which is pretty amazing considering I am yet to convince my grandfather to touch a computer.  'David Attenborough's Great Barrier Reef Dive VR' and ' David Attenborough's first life VR' represent the fruits of this collaboration and from the 8th of April they will be available for the public to see at the Australian Museum.
1 comment
Read more

NOTE: This review compiles an experience of both the pre-release and final versions of Dark Souls III . The following section, concerning the pre-release was published on March 3rd 2016, and is reproduced here in its entirety. An updated section for the final version of the game follows at the end of this review. ---  PRE-RELEASE: THE SHORT VERSION 'I may be but small, but I shall die a colossus.' - Lord of Cinder. Dark Souls III is everything you could be wanting from a From Software game. It balances the tonal feel of the first game, the better player orientation of the second , and the faster combat of Bloodborne . It is, in every sense, a From Software "Best Of Gameplay", a number of excellent factors struck through with an enticing plot, sumptuous visuals and killer sound design. Sounds perfect, right? Well, maybe, but only if you're a certain kind of person. We'll get to that. STORY What little narrative is given at the outset is f
Post a Comment
Read more