Showing posts from October, 2017
Show All

Hey guys, as you may or may not know I've started a spin-off podcast, The Sinner Files . It's the show where we confess, debate and atone for our biggest cinematic sins.  Basically, the podcast takes the Seven Deadly sins (greed, lust, sloth, wrath, pride, gluttony and envy) and attaches them to popular movies. For instance if it's a film I've seen way too many times, then that'd be the sin of gluttony. Each episode the "sinner" leads a discussion in relation to the film and we all play along accordingly. It's a bunch of fun and I highly recommend you come over and check it out. The podcast is available through Itunes and for Android . At the end of each episode the sinner is required to come up with a made up sequel for their chosen film. Check out the clips below for a taste of what we're cooking up.  Films we've covered so far include: Top Gun Die Hard Star Wars: Attack of the Clones IT The Big Lebowski  Con Air
Post a Comment
Read more

To celebrate the upcoming release of Brandon Sanderson's   Oathbringer , book three of   The Stormlight Archive , Chris reviews both of the previous books in the series. No scores at the end, but suffice it to say that they're worth reading. --- Epic fantasy books are often colloquially called "doorstoppers". These are the stories that are close to a thousand pages in length, and could be used to solidly prop up a door, build a house or bludgeon a home intruder to death. If it's written by Terry Goodkind, it's also an excellent source of birdcage liner. Doorstoppers can be scary even to devout fans of the genre. To the casual observer, a doorstopper's plot unfurls across a   Lord of the Rings -esque amount of pagecount. They can have dense worlds full of oddly-named characters who each have magical superpowers which the reader can only keep track of through a flow chart and encyclopedia of notes. The sense of immense plot and character expans
Post a Comment
Read more

WE LIKE TO WATCH: EPISODE FIFTY SEVEN - THOR: RAGNAROK

Episode 57! Stu and Billy are back this week to discuss Thor: Ragnarok . They also head to the flicks to watch Brigsby Bear and discuss it after. Thor: Ragnarok is the sequel to Thor: The Dark World,  and the seventeenth film in the Marvel Cinematic Universe (MCU). The film is directed by Taika Waititi ( Boy, What We Do In The Shadows, and Hunt for the Wilderpeople ). Imprisoned on the alien planet Sakaar, the mighty Thor (Chris Hemsworth) finds himself in deadly gladiatorial competition that also pits him against the hulk. Time is ticking though as Thor must escape and race back to Asgard to save his civilisation from the all-powerful Hela (Cate Blanchett) and prevent the coming Ragnarok. The film also stars Tom Hiddleston, Tessa Thompson, Mark Ruffalo, Idris Elba, Karl Urban, Anthony Hopkins, Karl Urban, and many others. Brigsby Bear  stars Kyle Mooney as James Pope, a man obsessed with a children's television program titles Brigsby Bear Adventures. When the
Post a Comment
Read more

Reese Witherspoon is having a moment and it’s a pleasure to see. It is so satisfying to witness that the actress who gave us the utterly original and terrifying, Tracy Flick, has still so many more surprises for us. That super sharp, full of intensity, scarily Machiavellian high-school girl (perhaps sociopath) promised an actress who does not hold back. Reese commits fully and with real vigour and we have seen this over and over again in roles like Legally Blonde  (the original is still so fun), Walk the line , Vanity Fair and more. Recently the critically-acclaimed and Emmy award winning TV series Big Little Lies which is sensational, as well as her role in it. In Home Again Reese has returned to the romantic comedy genre which she has championed in her career many times and sadly, to some questionable results. I know Sweet Home Alabama  is a favourite among many but sadly it did not ignite me. I am quite fond of Just Like heaven  with Mark Ruffalo (don’t judge) which I
1 comment
Read more 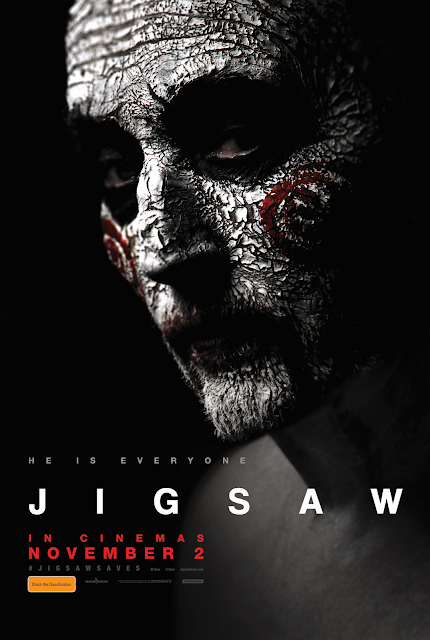 Thanks to the truly awesome folk at STUDIOCANAL, we're giving you the chance to win 1 of 10 double passes to a special Sydney advanced screening of JIGSAW on Monday the 30th of October. How do you get your hands on such an awesome prize? Great question, just head over to our Facebook page right here to find the JIGSAW post with all the details on how to enter. So simple!  After a series of murders that bear all the markings of the infamous Jigsaw killer, law enforcement find themselves embroiled in a new twisted game that’s only just begun. Is John Kramer back from the dead to remind the world to be grateful for the gift of life? Or is this a trap set by a killer with designs of their own? JIGSAW , creeping into cinemas November 2, is the next installment in one of the highest-grossing horror franchises of all time, and has been reinvigorated for a broader, contemporary audience – perfect for those who love the classic horror flick, and for new audiences alike!
Post a Comment
Read more

Episode 56! Stu and Billy are back this week to discuss Blade Runner 2049 . They also head to the flicks to watch Happy Death Day and discuss it after. Blade Runner 2049 is the sequel to Blade Runner (1982) and directed by Denis Villeneuve ( Arrival, Sicario, Prisoners, and Enemy ). In 2049, 30 years after the first film, bioengineered humans called replicants have been integrated into society. Officer K (Ryan Gosling), a new blade runner for the Los Angeles Police Department, hunts down and "retires" rogue older model replicants. During K's investigation into a growing replicant freedom movement he unearths a long-buried secret that has the potential to plunge what's left of society into chaos. His discovery leads him on a quest to find Rick Deckard (Harrison Ford), a former blade runner who's been missing for 30 years. The film also stars Ana de Armas, Sylvia Hoeks, Robin Wright, Mackenzie Davis, Carla Juri, Lennie James, Dave Bautista, Jar
Post a Comment
Read more

A few years back, I watched The Godfather : a timeless classic and a cinematic tour de force, noted for many film awards and a ton of quotable lines. I really didn't enjoy it. Part of it was that some aspects of the 1972 film had dated by the mid-2010s when I saw, but it was also because I was left underwhelmed given the immense praise the film had been heaped with. It certainly wasn't bad, but I didn't engage with it the way all my fellow cinemaphiles seemed to (Stu, if you're reading this, please don't hit me). The critical acclaim turned me off what would have otherwise been a pretty competent crime film - or an above-competent one whenever Marlon Brando is on-screen. Certainly not a bad film by any stretch, but definitely not for me. I think that's the same problem I've encounted with Ann Leckie's work. Her debut novel, Ancillary Justice, was certainly thought-provoking and a departure from garden variety sci-fi, winning every award under the
Post a Comment
Read more 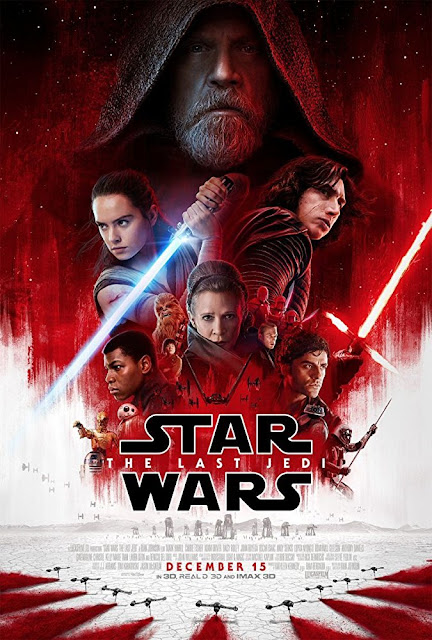 Check out the latest trailer Star Wars: The Last Jedi. The crew here at Geek of Oz are all dying to see it and will be literally watching the clock til December.
Post a Comment
Read more

September at the movies 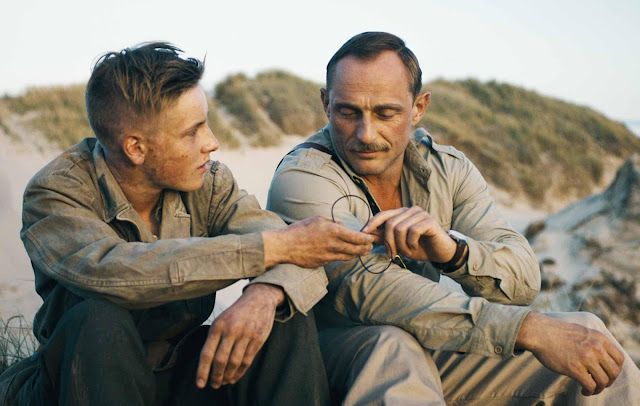 Okay, seriously, where is this year going?! I know I joked about it last month, but I blinked and September has gone. The only change to my Top 10 was Lost City of Z subbing in for A Ghost Story ; both are damn fine films and I hope you make time to see them. October has some highly anticipated releases, so it’ll be interesting to see how my list holds up. As always, you can track my Top 10 list as it has evolved from month to month throughout the year by hitting the links for each month. January  February  March  April May  June July August  I’d love to hear about your favourite films for the year, so feel free to sound off in the comments below, or come over to our Facebook page. - Stu  Top 10 as of the end of September: 1. Land of Mine 2. Moonlight 3. Get Out 4. I am Not Your Negro 5. Call Me By Your Name 6. Dunkirk 7. Lady Macbeth 8. Baby driver 9. Lost City of Z 10. Logan Lucky Films I've watched this month: The Room Gifted L
Post a Comment
Read more

WE LIKE TO WATCH: EPISODE FIFTY FIVE - KINGSMAN: THE GOLDEN CIRCLE

Episode 55! Stu and Billy are back at the flicks this week to watch Kingsman: The Golden Circle!   Kingsman: The Golden Circle is the sequel to Kingsman: The Secret Service and directed by Matthew Vaughn ( Lock, Stock, and Two Smoking Barrels, Layer Cake, Stardust, X-Men: First Class ) . Set a year after the first film, The Kingsman have their headquarters destroyed by a new enemy called The Golden Circle.  After discovering they have an American counterpart organization called Statesman, the members of Kingsman find new allies to help thwart The Golden Circle's world dominating plans. The film stars Taron Egerton, Mark Strong, Colin Firth, Julianne Moore, Halle Berry, Elton John, Channing Tatum, Jeff Bridges, Edward Holcroft, Hanna Alström, and many others. As well as the films, Stu and I discuss what else we've been watching this week, and look over the latest in movie news. As always it would make our day if you could take a couple of minutes to rate and
Post a Comment
Read more
More posts