Gadzooks! Image Comics Morning Glories issue #1 has hit the trifectaby selling out once again from the distribution level. To keep up with demand a fourth printing variant will be released with an all new cover featuring the work of interior artist Joe Eisma.
I have to say, after report on the sell out last week I went out and bought issue number #1 of Morning Glories. It really is a phenomenon... it is officially on my WIFE's pull list!
MORNING GLORIES is written by Nick Spencer, the burgeoning creative mastermind behind FORGETLESS, EXISTENCE 2.0 and 3.0, and SHUDDERTOWN. Eisma pencils and inks the series, and Rodin Esquejo provides the gorgeous covers.
Shadowline Publisher and Image partner Jim Valentino exclaims, "We are completely blown away and eternally grateful to the fans and retailers who have made this the biggest hit in Shadowline history!"
"Morning Glory Academy is one of the most prestigious prep schools in the country. But behind its hallowed doors, something sinister and deadly lurks. When six brilliant but troubled new students arrive, they find themselves trapped and desperately seeking answers in a place where nothing is what it seems to be!"
MORNING GLORIES #1 Fourth Printing (AUG108116), a 32-page full-color comic book for $3.50, will be in stores October 20, 2010. The second printing of MORNING GLORIES #2 (AUG108012) will be in stores September 29, 2010. MORNING GLORIES #3 (AUG100483) will be in stores October 20, which means retailers still have time to increase orders of the third issue of this unstoppable series. 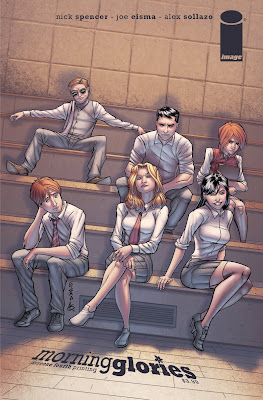