Image News - Morning Glories Sells Out, in a Good Way

- September 15, 2010
The first issue of Image Comics' Morning Glories has sold out twice already and has a third printing underway. The incredible part to this story is that issue #2 has already sold out at a distribution level... BEFORE EVEN HITTING THE SHELVES! "This is amazing!" stated writed Nick Spencer "Never in our wildest dreams did Joe, Rodin and I ever expect Something like this."

Image are in preparation to create a second printing of issue #2 which will hit shelves October 13th and if things keep travelling they way they are, they may as well do the same for issue #3, due out October 20th.

Written by Nick Spencer, art by Joe Eisma and covers by Rodin Esquejo, Morning Glories Academy is one of the most prestigious prep schools in the country. But behind its hallowed doors, something sinister and deadly lurks. When six brilliant but troubled new studnets arrive, they find themselves trapped and desperatelyseeking answers in a place where nothing is what it seems to be! 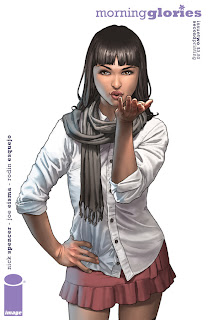