The House of Ideas have been so kind as to supply us with a preview of New Avengers #5 due for release on the 13th of October. I personally have really been enjoying this series so far. It has introduced me to a small handful of characters that I've never really been exposed to. Also, Immomen's art is as sharp as ever!

Marvel is pleased to present your first look at New Avengers #5, from the superstar creative team of Brian Michael Bendis and Stuart Immonen! The Earth has been invaded by a near-limitless amount of extra dimensional demons and the very fiber of reality is tearing itself apart. With their options exhausted, one of the New Avengers must make the ultimate sacrifice to save the Marvel Universe. Don’t miss New Avengers #5!
NEW AVENGERS #5 (AUG100566)
NEW AVENGERS #5 IMMONEN VARIANT (AUG100568)
NEW AVENGERS #5 VAMPIRE VARIANT (AUG100567)
Written by BRIAN MICHAEL BENDIS
Pencils & Cover by STUART IMMONEN
Vampire Variant by STEFANIE PERGER
Variant Cover by STUART IMMONEN
Rated A …$3.99
FOC – 9/23/10, On-Sale – 10/13/10 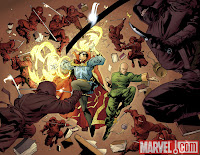