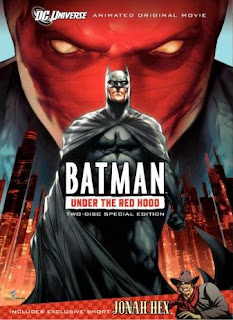 The eighth tasty portion from the DC Universe Animated Original Movie line from Warner Bros is Batman: Under the Red Hood, a direct to DVD animated film based on the Batman: A Death in the Family storyline written by Jim Starlin and the Batman: Under the Hood storyline by the writer of the movie and current Power Girl scribe, Judd Winick*.
Unfortunately for us Aussies we had to wait until the 31st of August for its release as opposed to the 27th of July in the good ol' US of A and while it may not seem like a long time, for a geek such as myself, it's an eternity!
The basic story of Batman: Under the Red Hood revolves around the death of the second Robin, Jason Todd and the return of a reborn version of an old foe, The Red Hood. The Red Hood was the initial incarnation of the Joker going back to 1951, back before his Jack Nicholson-esque plunge into a vat of chemicals, causing his disfigurement and eventual insanity. The new Red Hood in his angry biker garb makes his way into Gotham, kicking ass and taking names, putting the mob bosses on notice much to the chagrin of another perennial Gotham crime figure, The Black Mask.

Visually, for the most part, the animation was fantastic, really sharp lines and a distinct contrast between palette of the main players and Gotham itself. There were certain points, such as action sequences which were really exciting and visually striking, there's a fight scene in a bathroom which would rival just about any live action movie out there. What did disappoint me were a small number of scenes which just didn't seem as polished as the rest, not quite as detailed. But all in all the animation was the best of all the DC Animated Movies so far.
Gotham city doesn't seem be a main character like it is in Batman: The Animated Series but with appearances by our protagonist Batman/Bruce Wayne, The Red Hood, The Joker, Robin, The Black Mask and fan favourite Nightwing. Batman, voiced by Kevin Con... holy alternate voice over Batman! This version of Batman is voiced by Bruce Greenwood (Captain Pike himself!) who does a great job, although it can come across a little off putting for anyone savvy with The Animated Series. At any second I expected Kevin Conroy's husky baritone to push through. One can only wonder whether the omission of legendary voice over director Andrea Romano had anything to do with Kevin Conroy's replacement... 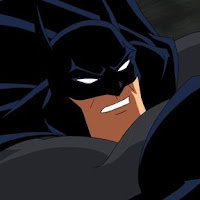 Also on the bill are John DiMaggio as the Joker, Jensen Ackles as The Red Hood and the stand out performance from Neil Patrick Harris as Nightwing. NPH managed to infuse his usual charm and swagger into Nightwing without turning the character into a spandex suited-up Barney Stinson.
The movie itself is great and another fantastic edition to an already stellar line up of animated movies. The special features on the DVD version on the other hand can be summed up in one work, scant. The DVD version only includes and advanced look at the upcoming Justice League: Crisis on Two Earths and Superman/Batman Apocalypse and a trailer for the previously released Batman: Gotham Knight.
Judged purely on it's merit as a movie and disregarding the lack of special features I would have to give this movie a solid 8 out of 10. A good fun movie full of action and, most surprisingly, emotion.
*Judd Winick is the author and artist of "Pedro and Me: Friendship, Loss and What I Learned", published by Henry Holt and Company New York in September 2000. This is the only book that has made me cry, I mean real tears, dead pet when you're 5 years old style tears. I highly recommend this book!!!
Batman Comics dc DVD Joker Movies Nightwing Red Hood Reviews Robin Winick