Hack Slash was one of those titles that I felt as though I was missing out on. Thankfully Image Comics have released the current Hack/Slash: My First Maniac mini which will be followed by Hack/Slash: Me Without You, the origin story of Cassie's macabre sidekick Vlad.
OFFICIAL PRESS RELEASE
WITH OR WITHOUT VLAD
Tim Seeley tells Vlad's origin story in HACK/SLASH: ME WITHOUT YOU one-shot from Image Comics
Berkeley, CA - 20 October 2010 - Cassie Hack has taken out some of the most dangerous slashers in the world. But could she have done it without the help of her enormous sidekick, Vlad? In January 2011, HACK/SLASH fans will finally find out how Cassie and Vlad became an inseparable pair!
The follow-up to the smash hit HACK/SLASH: MY FIRST MANIAC miniseries, HACK/SLASH: ME WITHOUT YOU reveals the origin of comicdom's favorite hulking sidekick. Before Vlad roamed the country, battling slashers with Cassie Hack, he haunted the alleyways of Chicago as the living urban legend, the Meat Man. But even a cleaver-wielding monster gets lonely, and Vlad's quest to find out who he really is will lead him on a bloody path!
"I was so pleased with how MY FIRST MANIAC turned out," says Hack/Slash writer and creator TIM SEELEY. "Because of that and the reaction from the readers, I decided to tell a story I've been wanting to tell for a long time: the secret origin of Vlad, Cassie's monstrous partner. As with MANIAC, it'll be an accessible story both to new and old readers, with lots of unexpected twists."
HACK/SLASH: ME WITHOUT YOU OS, a 32-page, full-color comic book written by Seeley and illustrated by Daniel Leister, with covers by Leister and Ross Campbell, will be in stores January 5, 2011, for $3.50.
Catch up with the adventures of Cassie and Vlad with the following spectacular collections: HACK/SLASH OMNIBUS Vol. 1 (APR100408, $29.99) and HACK/SLASH OMNIBUS Vol. 2 (MAY100447, $29.99). HACK/SLASH OMNIBUS Vol. 3 (JUN100415, $29.99) will be in stores November 10, 2010, and HACK/SLASH: MY FIRST MANIAC (S/N HC: SEP100462, $29.99; TP: $9.99) will be in stores November 17, 2010. 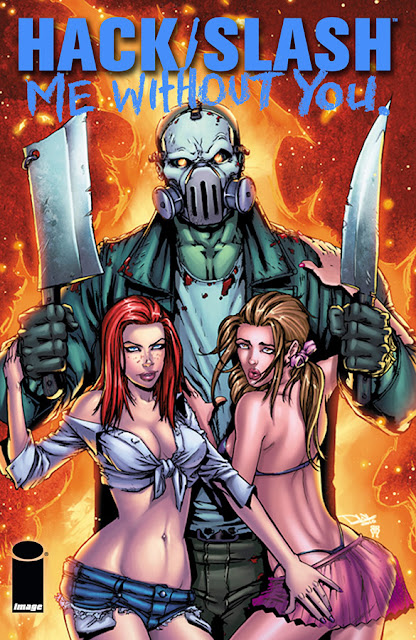