Great News for those of you in the states with The Super Hero Squad Show returning to air on the 23rd of October on the Cartoon Network US. This time Doom returns but the squaddies main problem this time around is old squiggle chin, Thanos.
I seriously love this show! Unfortunately it only aired sporadically over here but thankfully the DVD's came out quick smart.

Marvel’s The Super Hero Squad Show is back October 23rd, 2010 with an All-New Season on Cartoon Network U.S.!
An all-new, action-packed season of The Super Hero Squad Show makes a sensational return to Cartoon Network! All of the Super Heroes you know and love are flying, smashing and clawing their way back to the small screen with 26 more full-length episodes beginning on October 23rd! The Super Hero Squad Show is a family-friendly, animated series featuring super-stylized versions of Marvel’s most popular characters, including Iron Man, Thor, Captain America, Hulk and Wolverine.
Marvel Television has gathered the hottest superstar talent to voice the roles of the dynamic heroes and wicked villains in the second season of The Super Hero Squad Show. This list of who’s-who includes Emmy Award winner Jane Lynch (Glee) as Nebula; Emmy award winner Jim Parsons (The Big Bang Theory) as Nightmare; Adam West (1960s TV series Batman) as Nighthawk; Katee Sackhoff (Battlestar Galactica) as She-Hulk; and Emmy award nominated Ty Burrell (Modern Family) as Captain Marvel. In addition to this all-star line-up, your favorite voice talent is back for a second season, including Tom Kenny (SpongeBob Squarepants, Transformers, PowerPuff Girls) as Iron Man, Captain America and MODOK; Steve Blum (Wolverine and the X-Men, Hulk Vs., Ben 10) as Wolverine ; and Charlie Adler (Transformers, G.I Joe, Roccos Modern Life) as Dr. Doom.
“Marvel is extremely excited to bring Iron Man, Thor, Captain America, Hulk and many of your other favorite Marvel characters to Cartoon Network for the second season of The Super Hero Squad Show,” said Jeph Loeb, Executive Vice-President and Head of Marvel Television. “The first season delivered all the thrills, action and laughs that audiences just couldn’t get enough of. This season, Marvel has pulled out all the stops, from intergalactic and interdimensional travels to Emmy Award winning talent guest starring as some of Marvel’s most famous (and infamous) characters. From the first episode, you will be hooked.”
The Super Hero Squad Show’s second season takes viewers on action packed galactic adventures and over-the-top otherworld expeditions! Just when the Infinity Sword has been rebuilt, Doctor Doom is behind bars, and Villanville destroyed – a new evil threatens the universe… the space-conqueror THANOS! Determined to prove his superiority over his sister, the space-pirate NEBULA, Thanos sets out to collect the six INFINITY STONES. The stones will give him absolute power over the universe, so the Squad must stop Thanos from collecting them in his INFINITY GAUNTLET before it’s too late.
Executive Producers: Alan Fine, Simon Phillips and Jeph Loeb
Co-Executive Producer: Joe Quesada
Supervising Producer: Cort Lane
Producer: Dana Booton
Supervising Director: Mitch Schauer
Production Studio: Film Roman and Marvel Animation 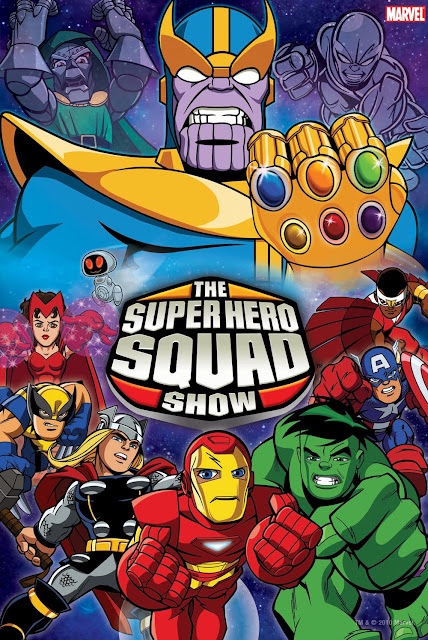