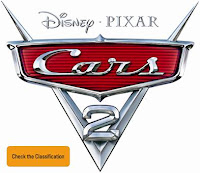 The good people at Disney have sent us a clip of next years Cars 2! I get excited for any Pixar movies but this one looks like a cracker!