Movie Review - Nausicaa of the Valley of the Wind BluRay

Nausicaa of the Valley of theWind, just one of Studio Ghibli's numerous masterpieces has bee released here in Australia on stunning BluRay HiDef by the good folks over at Madman. Follow on after the jump for my rundown of the film and BluRay features.

After it's initial inception by genius creator Miyazaki Hayao, Nausicaa of the Valley of the Wind was finding it difficult to obtain funding and backers to get the film off the ground. In order to generate buzz and an initial flow of money Miyazaki-san wrote and illustrated the Nausicaa manga series which ran between 1982 and 1994 to much acclaim.

With the manga series creating a massive amount of buzz and income Nausicaa went into production with Miyazaki-san in the director's chair. One of his most controversial decisions was to employ and unknown and inexperienced animator named Anno Hideaki to complete an action packed and pivotal scene. Miyazaki-san's foresight was only overshadowed by Anno-sans own success as the creator and producer of the smash hit franchise Neon Genesis Evangelion.

2 years later in 1984 Nausicaa of the Valley of the Wind was released and soon raced to the top of the Japanese box office. 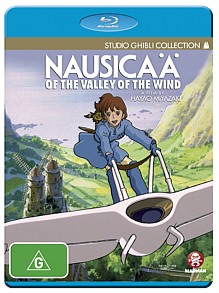 All of this information is relevant purely due to the film's importance in relation to Japanese animated feature films and Studio Ghibli as it currently stands. Without Nausicaa there would have been no Totoro, no Spirited Away and no Mononoke. In fact, Nausicaa was created before Ghibli even established itself as a studio! It was only due to Nausicaa's success that Miyazaki-san, Takahata Isao and Suzuki Toshio banded together to form Studio Ghibli. Ghibli being Italian for "hot desert wind" and also a type of aeroplane from WWII.

The film tells the story of Nausicaa, the princess of a land which is under siege from an increasingly encroaching "Toxic Jungle". The animation is slightly dated by today's standards although not so much in quality as in style. The quality of animation is still up there with anything on offer nowadays. The BluRay release further empasises this with a crisp, clean picture with minimal film grain and very few discernible artifacts visible. This transfer is incredibly close to perfect. I also own this film on DVD and it is like chalk and cheese. They may as well have named the BluRay release "Nausicaa 2.0".

As an added bonus the BluRay version has a number of previously unreleased special features including a history of Studio Ghibli, an audio interview between Anno-san and Suzuki-san, complete BluRay storyboards and a behind the scenes look with US voice actors including Captain Jean-Luc Picard... err... Patrick Stewart.

This film, just like EVERY film in the Studio Ghibli back catalog, is a wonderfully fun-filled ride into the fantastical. A family friendly film that gently affirms appreciation for the environment. It's a great story, fun, visually beautiful and conveys a strong and positive message, what more could you ask for?

I swore that I wouldn't replace any DVD's that I already own with BluRay releases but Nausicaa has ruined that idea. I can't stress enough how much I love Ghibli films, everything from Totoro to Grave of the Fireflies and after watching this BluRay I now have me fingers firmly crossed for a timely transfer of My Neighbour Totoro and Kiki's Delivery Service.

Nausicaa of the Valley of the Wind on BluRay is available now from Madman and most major retailers.
Anno Hideaki Evangelion Madman Miyazaki Movies Nausicaa Reviews Studio Ghibli