Earlier tonight I had the pleasure to attend Anime Matsuri, an anime festival put together by the Japan Foundation and SMASH! as part of the 14th annual Japanese Film Festival.
Oblivion Island: Haruka and the Magic Mirror is a mix of 3D animation and traditionally painted backgrounds by the internationally renowned Production I.G, the studio responsible for the Ghost in the Shell Series, Patlabor and FLCL among others.
Directed by Shinsuke Sato, director of Princess Blade and the upcoming Gantz live action films, Oblivion Island tells the story of Haruka. Her mother past away during Haruka's youth, leaving a void of pain and resentment which was pushed deep inside and forgotten. Left to Haruka was her mothers ornate hand mirror, a gift which does little more than stir bad emotions. The mirror is neglected by Haruka and is soon lost. Haruka, remembering fables her mother told her about thieving foxes, decides to visit a local shrine to pray to the fox god to return the lost mirror. This is when she bumps into cute little Teo, a mischievous creature from a distant land. This is where the adventure truly begins! 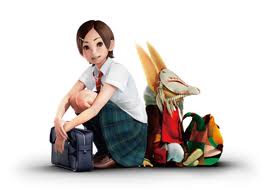 The story of this feature film is somewhat reminiscent of Jim Henson's Labyrinth. A rebellious teenage girl is whisked away to a fantastic land where she befriends one of the local creatures. This creature begrudgingly assists her in her quest with the promise of an insignificant trinket for his troubles. However, the creature is approached by the ruler of the land who makes an offer that the creature cannot refuse, betray the girl or pay the price. It draws a basic comparison to the relationship between Sarah, Hoggle and Jareth although it is by no means an outright rip off.
The story is enjoyable throughout and had more than it's fair share of belly laughs and incredibly cute and heart warming moments. Cotton, Haruka's childhood friend is possibly the cutest character to ever grace movie screens! とても可愛い! An overall family friendly feature that not only entertains but also delivers the message that memories, just like physical mementos, are things to be cherished.
The animation in Oblivion Island was beautiful. The CG character elements worked surprisingly well in contrast to the traditional hand painted backdrops. I'm assuming one of the backdrops would be of Fushimi-Inari. A shrine dedicated to the fox in Kyoto's south.

Furthermore, the stunning landscapes of Oblivion were strangely familiar while being completely alien. Billboards, posters and advertising for (almost) well known brands were used as cladding and roof tops. The CG was sharp and vibrant and action scenes were crystal clear. The character designs have a distinct anime look, saving them from falling into the uncanny valley. The facial expressions conveyed a great sense of emotion but Haruka's body movements still seemed somewhat stiff and restricted at times.
Unfortunately I can't comment too much on the voice acting as my Japanese is far too limited. Instead of listening to the voice actor I find myself far to intent on listening to the words.
The soundtrack with original music by Tadashi Ueda, who also worked with Sato-san on Sand Clock, was big and bold, befitting the action fantasy film that it accompanied.
This movie was really a great ride. A reminder to cherish the moment and never forget those things that you hold dear. A visual delight and a definite addition to my DVD collection. I firmly believe that this film, if dubbed in English and marketed for a holiday period theatrical release, would perform very well with the Pixar/Dreamworks demographic. A true joy to watch.
animation Anime Haruka Labyrinth Movies Oblivion Island Production IG Reviews