Birdy the Mighty: Decode Collection 1 walks a well worn path where a strange yet beautiful woman is revealed to be a shape changing super heroine, battling monstrous and grotesque oddities. Although treading this formulaic road, the difference between BTMD and most of these similarly themed stories that came before it is that Birdy the Mighty: Decode does it well.
The pretty Birdy Cephon Altera, an intergalactic Federation Police Officer finds herself in pursuit of alien fugitives when she arrives on Earth. When battling one of these aliens she inadvertently kills our other protagonist, Tsutomu Senkawa, an average teenage school kid. While the Federation restores Tsutomu’s body he is forced to share the mind, and body, of the shape changing Birdy.

BTMD is based upon the manga, Birdy the Mighty, which was released between 1985 and 1988 by writer Masami Yuki who is best known for the manga and anime Patlabor. The manga series was serialized in Shonen Super Sunday magazine although eventually faded away only to be reborn in Weekly Young Sunday between 2003 and 2008. In 1996 Madhouse, the studio responsible The Girl Who Leapt Through Time, Redline and a number of upcoming Marvel Comics properties, released a four episode OAV. BTMD sees the triumphant return of Tetsuwan Birdy as realised by A-1 Pictures, the child of parent company Aniplex. The animation in this series is truly top notch. The animation is crisp and clean while still maintaining a great level of detail in the backgrounds. Birdy’s powers and movements generate sparks and light which are beautifully rendered, the luminescence of these moments plays in stark contrast to the often dark backgrounds.
Directed by Kazuki Akane of The Vision of Escaflowne fame, the series does a great job of keeping the viewer interested. Not only do our main characters randomly switch bodies but we, the viewer, are often tossed around between the humdrum settings of Tokyo and the exciting vibrancy of Birdy’s home planet Altair.
The character designs are for the most part exciting and fresh. Birdy is well designed in her logic defying costume which, while offering an abundance of fan service, doesn’t come across as being outright lewd. The creature designs are fantastic and varied. The least inspiring of all character designs is that of Tsutomu who just looks like any other non-descript anime school boy. With that said, this in no way affects the viewing pleasure of the series. 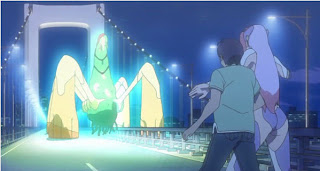 BTMD Collection 1 is a flashy and fun filled romp across the galaxy and into the minds of our two main protagonists. This is where BTMD really shines. Hiroshi Onogi has excelled in writing a series that series that uses over the top fight scenes and a touch of fan service merely as a means to deliver a heartening story of love and friendship. This series is a triumph where so many others fail, it manages to make you feel for our main players while still delivering more than its fair share of space travel and stuff getting blown up. Series 1 has certainly done enough to make me excited to see how our characters fair in Series 2. Mission accomplished Birdy!