In 2003 Nagaru Tanigawa released a light novel called The Melancholy of Haruhi Suzumiya. Since then we've seen the release of an ongoing manga series, ever-expanding anime series and a swag of spinoffs including six video games.

Unfortunately I must plead ignorant to the light novel series and will have to settle for a review and comparison between the anime and manga series.

So, can the millions of adoring fans and devotees of Haruhiism be wrong? Follow on to find out.

To say that TMOHS was a sensation is nothing short of an understatement. The story is lead by our male protagonist, Kyon, who befriends the all to whacky Haruhi Suzumiya. This comes as a shock to the rest of their classmates because no one has ever been able to get behind the force fields of this fanatic of all things supernatural. Haruhi is smart, athletic, charismatic and just a little bit loony. On the first day of High School she catches everyone off guard by stating that she has no interest in any of her classmates unless they are time travellers, ESP'ers or aliens. After trying her hand at every student club available she decides that the only way for her to be satisfied is to create her own club, thus, the SOS Brigade was born.

It is extraordinarily difficult to slot TMOHS into one specific genre. It is part high school drama, part sci fi action and part romantic comedy with Kyon surrounded by a bevy of babes, Haruhi, Mikuru Asahina and Yuki Nagato. The sci fi aspect really comes into play when we find that in her search for the unknown, Haruhi is the actual cause of strange supernatural phenomena. In her search for the incredible and a battle against the mundane she unknowingly surrounds herself  with the mysterious time travelling, ESP wielding aliens that she so desires. 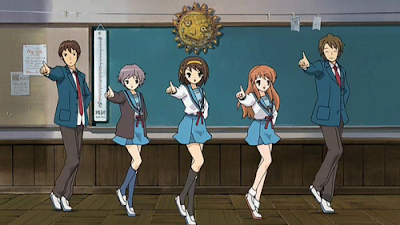 Haruhi, as with many lead characters, does well to buck societal norms. She is an attractive young high school student who is assertive and strong willed and above all, dominant. She achieves her goals through sheer tenacity and her overwhelming personality. The other members of the SOS can't help but follow her lead whether due to the fact that they too are interested in her incessant hunt or because it'd just be too difficult to decline. Her enthusiasm is infectious. This is where the predominant comedic aspect come to fore. Haruhi's unbridled enthusiasm generally means pain for everyone else, leading us to those golden awkward moments that are cringe worthy yet hilarious,

When initially broadcast the series was shown in arcs which didn't correspond with the manga, nor at times the following episode. This may have been a great way of conveying the eccentricities of the series although added more confusion than necessary to the already confusing plot. Thankfully Madman have remedied this by releasing the series one collection in viewing order, not broadcast order.

The anime series (released in Australia by Madman) captures the tone of the manga (released in English by Yen Press) perfectly. From the strong will and eccentricity of Haruhi to the innocent submissiveness of freshman Mikuru. Each character conforms to a previously established anime/manga archetype, Kyon is the unwilling and blasé male lead while Mikuru is the submissive moé character complete with bunny and maid outfits. Yuki is a quiet, brooding outsider and Itsuki plays the handsome and mysterious observer. Although archetypical these character types appear increasingly apt as the series plays out.

The art in the manga, supplied by Gaku Tsugano, is crisp and dynamic with some truly fantastic backgrounds. The character designs do well to differentiate all of the main characters although at times I have found myself getting Kyon and Itsuki confused. There is a certain amount of fan service although it is in no way subversive or unwarranted. Even in panels with Mikuru in her bunny costume she appears far more moé than sexual. 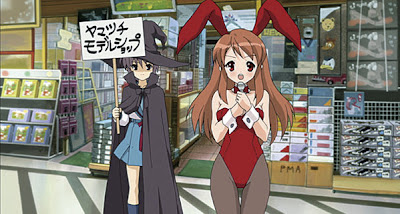 The character designs and even landscapes are almost shot for shot between the manga and anime. The overall look and feel of the series are strikingly similar. So too is the storyline, sticking close to the source material the anime progresses quickly and wastes no time setting up our main players and deposits a sense of uneasiness in the viewer, the feeling that there is more at work than meets the eye.

The quality of animation in the anime is up there with the best releases of 2006. It is clean and crisp with extra attention paid to lighting and illumination. Produced by Kyoto Animation of Kiddy Grade and Inuyasha fame, the series is introduced and farewelled by a pair of songs performed by the Japanese voice of Haruhi, Aya Hirano. The closing theme, Hare Hare Yukai (Sunny Sunny Happiness) is accompanied by an animated choreographed dance number which soon became a hit with anime geeks everywhere. Fan clips exploded on sites like YouTube and Nico Nico Douga. Madman even held a competition for the best re-enactment! 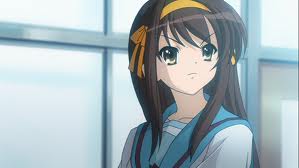 The voice acting in the series is exceptional. Both the Japanese and English voice actors are a veritable who's who of the voice over industry. Wendee Lee (Bleach & Naruto) and Crispin Freeman (Blood+ & Ghost in the Shell: Solid State Society) play Haruhi and Kyon respectively while Stephanie Sheh and Michelle Ruff play Mikuru and Yuki. These actors do a great job of further portraying the individual characteristics of the cast in all of their eccentric glory.

If you have read and enjoyed the manga I would highly recommend the anime and vice versa. If you haven't had the pleasure of partaking in either, don't be scared to jump on board this super popular series. Embrace the chaos and enjoy the manic mayhem that is The Melancholy of Haruhi Suzumiya.

The manga version of The Melancholy of Haruhi Suzumiya, published in English by Yen Press is available from most manga stockists.