Ho Ho Ho Yo! It's Christmas/Hanukkah/Kwanza time which means you have to go and spend your hard earned money on a whole bunch of people, some of whom you like and some of whom you tolerate.

Here I present to you a handy dandy gift guide for the various geek's in your life. 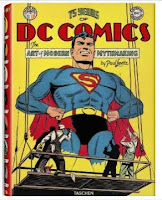 75 Years of DC Comics: The Art of Modern Mythtaking - This book by Paul Levitz, former writer and editor and executive for DC Comics presents this gigantic book, nay, tome. Levitz began his 35 year stretch at DC and wound up in the big chair, President of DC Comics between 2002 and 2009. This is a guy who is responsible for hiring talent such as Alan Moore, Ramon Perez, Marv Wolfman and Keith Giffen, all reknowned as being modern day masters in the field.

It has been said that due to the size of this book you are best off reading it in a small park or a disused stone quarry. This goliath book weighs in at around 7 kilograms or 15 lbs for those up north! The print is glossy and fantastic quality and the history contained within its cover will leave any comic book fan well pleased. 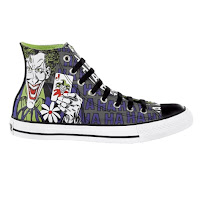 Batman All Stars - This pair of All Star kicks features Batman on one side and his arch-nemesis The Joker on the other. The perfect gift for a comic book geek or simply a shoe fan. If your geek is a comic book geek with a penchant for shoes and a preference for Converse All Stars... they may just die from excitement!

Although not exclusively, these shoes are available from Journeys Shoes at www.journeys.com

Go-Go Girls of the Apocalypse by Victor Gischler - Without a doubt the best book that I had the good fortune to read this year. Spinning the classic apocalyptic tale on its head, Mr Gischler takes us on a ride through a brand new world of cannibals, gender confused inmates and steroid fuelled travel.
9 Years after the fall of civilisation Mortimer leaves his mountainside cabin only to find that the only safe haven is a chain of nudey bars, Joey Armageddon's. This is a fantastic book full of violence, sex, gore, humour, sex, gore and humour. I cracking read from start to stop and potentially an upcoming feature film! Read it now so you can say "yeah, I read it before it was big..."

Neverwhere by Neil Gaiman - Neverwhere is an absolute gem of a read by one of the most highly regarded authors of modern times, Mr Neil Gaiman. Although filled with fantastical characters and creatures, Mr Gaiman manages to convince the readers that the entirety of the book is possible and by the end you can't help but start questioning your own surroundings. Based upon the BBC television series by Mr Gaiman and comedian Lenny Henry, Neverwhere tells the story of businessman Richard Mayhew. Mayhew stops to help an injured young lady before being drawn into an unseen world of assassins, hidden cities, floating markets and talkative rats.
Although this book isn't exactly new, it is without a doubt one of my favourite reads of all time, I can certainly say that any sci fi, fantasy or comic book fan will love this book.

Nintendo Wii - As far as video game geeks go your best bet this Christmas would be a Nintendo Wii. The Nintendo Wii doesn't have the fancy HD graphics of it's counterparts but what it lacks visually is well and truly replaced with the fun factor. As an added bonus the Nintendo Wii is being released in Mario Red to celebrate the 25th Birthday of Mr Mario Mario (yep, that's why they're called the Mario Bros, their surname is Mario!) 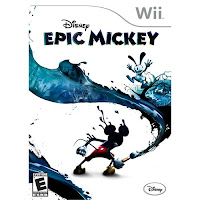 One quick note before you race out and get one, the Nintendo Wii console is currently 5 years old. Historically, Nintendo have upgraded every single one of their consoles at around the 5 year mark so don't be surprised if you see a Wii 2.0 released at some point next year.

Epic Mickey - If your geek already has a Wii the next best thing would be Epic Mickey, an open ended platformer from Walt Disney. In this all ages game you take control of Mickey in a journey to help save the world of forgotten characters, including Walt Disney's first commercially successful character Oswald the Lucky Rabbit.

Nausicaa of the Valley of the Wind Blu Ray - There has been some fantastic anime (Japanese animation) come out in the last 12 months. But as always, you can't possibly go wrong with some Studio Ghibli.

Released in Australia for the first time is high definition is Nausicaa of the Valley of the Wind. For those who are unaware, Studio Ghibli are the fine folk who brought Spirited Away and Princess Mononoke to our screens, a company most commonly referred to as Disney of the east. This is the film that started it all, in fact, before this film Studio Ghibli didn't actually have a name. It's a fantastic family movie that teaches the importance of environmental awareness.

Madman have released this classic on Bluray, packed with bonus features including an interview with Nausicaa animator Hideaki Anno (writer and director of Neon Genesis Evangelion)

Perfect Blue DVD - Another sure fire hit will be Perfect Blue, a classic psychological thriller by superstar director Satoshi Kon known for Millenium Actress and Paprika. Satoshi-san sadly passed away in August this year. Mima Kirigoe is a successful pop idol who gives up her lucrative career to pursue acting but sadly finds herself in a series of roles of questionable morals. The film follows her descent into the darkest recesses of her mind in a quest to find her lost identity.

Perfect Blue is available on DVD from Siren Visual. 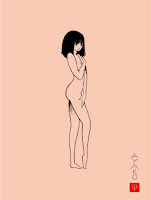 Ayako - From Astro Boy and Dororo creator Tezuka Osamu comes Ayako. Originally released in 3 volumes from 1972 to 1973, Ayako has been collected into a lovely hard cover bound book in English by Vertical Inc. Ayako is a very strange tale of a young girl who is imprisoned below the family house for the majority of her life while political and social chaos reign outside it's walls. Oh yeah, there's also a ludicrous amount of incest involved...

AX: Alternative Manga Vol 1- This English version of the collection from Top Shelf Productions contains a number of stories which push the proverbial envelope with relation to story content and artistic styles. Strictly adults only this book has enough pencil and ink genitals to last a life time. However, don't let this fact turn you off reading, AX is a great showcase of alternative story telling and a timely reminder to all manga fans that Japanese comics have much more to offer than Death Note and Fruits Basket alone. This book pushes the boundaries, sometimes too far but not irrevocably so.


Deb Aoki of About.com's Manga Guide said "Ax goes out on a limb where most manga creators dare not go, with an undeniable energy that crackles from almost every page... it will blow your mind."

Fujifilm Finepix REAL 3D W1 - What's better that great quality photographs? Great quality photographs in 3D! Although seemingly user friendly there is a decent amount of manual work to be done by the photographer in order to obtain an eye popping 3D image. In addition to the automatic mode there is a manual mode which involves the shooter taking a shot from one lens before moving into the correct position and taking another shot with the alternate lens. The two images are then merged into a 3D picture with the help of onboard software. These images can then be viewed on any 3D capable television. I previewed some Sony 3D tech while in Tokyo this year and I truly believe that it is the future of photography. The results were astounding.