Thor: The Mighty Avenger, written by Roger Langridge and illustrated by Chris Samnee has been an outstanding book, an absolute pleasure to read.

Surely with the Thor feature film just around the corner a new ongoing series set outside of continuity would be a hit with new and old readers alike. But critical acclaim can only keep a title afloat for so long and eventually the publisher will start to question the numbers.
I have been a strong and very vocal supporter of this series which will sadly come to an end in January. But why?


I first heard the news of Thor: TMA's cancellation from Marvel Chief Creative Officer Joe Quesada who said "Sorry about the TMA cancellation, folks. For the record, I don't make those decisions. That said, its a great and may be back again someday."

Sure, it may be back some day, but why does it have to go away at all? 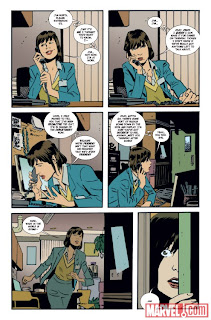 Sadly the sales of this book were by no means astonishing. According to data from Diamond Distributors issue #6 sold an estimated 8,420 units placing it in 186th position in the top 300 sales chart. Although not dazzling numbers, these sales placed Thor well ahead of Spider-Man (Marvel Adventures), Super Heroes (Marvel Adventures), Super Hero Squad and even the debut issue of Avengers: Earth's Mightiest Heroes. In no way would I insinuate that any of these titles should be cancelled as I currently collect and read all of them. I am merely using this as a reference by which to try and understand why Thor:TMA, over all other titles, is being cancelled.

After speaking with a number of retailers the main complaint that I have heard is that they were generally unsure of where to place the book on the shelves. Retailers stated that they were reluctant to face the book with the numerous other books currently on shelves due to the fact that it is outside of continuity and also as they viewed it to be a "kids" book. But also by placing the book in with the likes of Marvel Adventures, Super Hero Squad and Pet Avengers titles they were failing to reach the adult market. A catch 22 of Asgardian proportions.

When speaking with readers I have found that in a time so riddled with $4 books, readers are reluctant to read a book which is outside of continuity. Instead vying for titles which can be perceived as contributing to the universe as a whole. 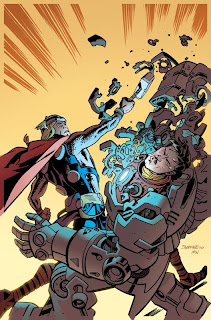 With the Thor feature film hitting cinemas next year, Odinson is a hot property. The amount of mini series currently on shelves which feature the character is surprising to say the least. Thor has often struggled to gain high readership and has had ongoing titles cancelled a number of times. I can't help but feel that perhaps Marvel started their Thor ambush somewhat too early. Those folks who are so unfortunate as to not enjoy comic books are blissfully unaware of the existence of the Thor flick.

Thor: The Mighty Avenger has been an incredibly fun series which has gained critical acclaim from readers and even other creators. Atlas scribe Jeff Parker can be quoted as saying, "And TMA (Thor: The Mighty Avenger) is terrific, isn't it". Roger Langridge created a great voice for Thor which was further reinforced by the phenomenal art of Chris Samnee. That kid is seriously set for big things.

I have been enjoying this series immensely which makes the break up even more disappointing. A clear stand out in terms of quality and enjoyment is being removed from shelves and will be bitterly missed by many. It is a real shame to lose a book with so much to offer. Surely Marvel, after seeing the book receive such high acclaim, and with a summer blockbuster on the horizon, could have held off their decision to cancel until all options were exhausted. I can't help but feel that perhaps there are politics at work in the House of Ideas.

All I can hope is that the sales of the remaining issues and upcoming trade perform well enough to see the god of thunder rise again.
Comics langridge marvel samnee thor Thoughts