Madman has released Kaze No Stigma (Stigma of the Wind) in one complete collection on DVD.
Kazuma Kannagi, heir to the throne of the fire magic wielding Kannagi Clan is cast out when it is revealed that he struggles to use fire magic at all. The nail in the coffin is when Kazuma is defeated in a battle for succession to his second cousin, Ayane.


Kazuma disappears for 4 years but upon his return the fire-magic users find that although he was unskilled with fire, he has quickly become an incredibly powerful wind magic user. Kazuma quickly comes to blow with Ayane who is now no match for Kazuma strength, even though she now wields the Enreiha a magical flame sword. The paths of both characters intertwine and begrudgingly become partners in a quest to find the murderer of a number of fire users.

Kaze no Stigma is based upon a series of light novels and manga written by Takahiro Yamato. The light novels will remain unfinished at 11 volumes due to the passing of Yamato-san in July 2009. There are a massive amount of differences between the light novels and anime which change the overall story of the series. What remains in the anime are the main characters and the core foundations of the series. Some of the major plot details have been changed so much as to give the anime a much more viewer friendly feel than the brooding darkness of the novels. 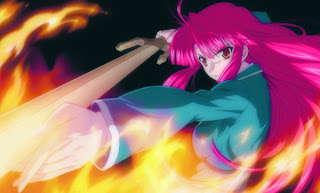 Released in 2007, the animation values are at around the standard for that year although as usual Studio Gonzo added a number of CGI elements to really differentiate this series from others released around the same time. Gonzo are well known for their use of CGI and this series is no different. They do a great job of using these elements in conjunction with traditional animation without taking away from the value of either. The action scenes are undoubtedly the highlight with brilliant flashes of colour and some sharp animation. Sadly the same attention wasn’t given to other areas of the story. The backgrounds, however, are of a very high quality. This in a way makes me think that a background should be just that, in the background. Not the most impressive part of the animation as a whole.
The most compelling part of this story is the triumphant return of the black sheep of the family. He comes back kicking butt and taking names but it all seems to fizzle out in the end. The all consuming anger of being cast out from the family seems to give way to nothing more than moody looks and angst riddled monologues. I feel as though they really could have kicked the internal turmoil up a good few notches, giving us a more emotive character along the lines of Edward Elric from Full Metal Alchemist. 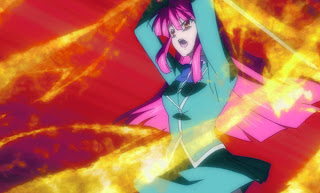 Upon Kazuma’s return he is seemingly invincible, although this is impressive to watch at first it soon becomes tiresome. The whole excitement of a good guy VS bad guy battle is the power struggle. Spider-Man always gets his butt kicked before getting his second wind and thwarting Electro’s dastardly plan. It never really felt as though he was at threat of being done over and therefore the story never felt as though it was teetering on that win or lose knife edge. The story isn’t all bad, it was more than compelling enough to keep me interested and watching to the last episode. Although this review may sound overtly negative I feel as though this is because I believe Kaze No Stigma could have been so much better than it was. It really could have been something great instead of something merely enjoyable.
The Kaze No Stigma complete collection is available now from Madman and most anime retailers.
Anime DVD Gonzo Kaze No Stigma Madman Reviews Takahiro Yamato