Based upon the manga of the same name by Sakurako Gokurakuin, Sekirei is yet another harem/fighting tournament anime centred around a strong yet naïve female and a hopeless, unwitting male. The major difference between Sekirei and many other series of the same ilk is that Sekirei does a bloody good job of it.
If you can stomach the gratuitous amount of fan service and bare breasts (stomach or enjoy), Sekirei actually offers a well told story which has a surprisingly deep story and characters with heart.

Consummate screw up, Minato Sahashi, has failed twice to gain entrance to university. While walking home, contemplating his future, he hears a commotion from afar. The noises get closer until eventually he is caught in the thick of it. A mysterious, beautiful and buxom girl named Musubi falls from the heavens right on top of the unsuspecting Minato. Thinking that Minato saved her on purpose Musubi soon becomes enamoured with the young man, battling to save him from a pair of scantily clad, electricity wielding twins. From here our story takes off and progresses at a surprisingly brisk pace. We are soon introduced to a whole new set of main players and explained the basis for the fighting tournament. 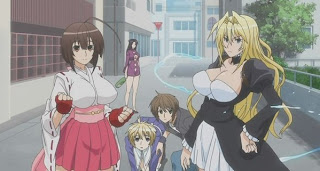 Musubi and Minato are joined by a kiss, a magical occurrence which links Minato as her “Ashikabi” and empowers her with even more impressive powers. This could be seen to be a metaphor for love in that the love between two people can bring the absolute best out of a person, forging them into an even better creature than they already are.
Sekirei is produced by Studio Seven Arcs, best known for their work on adult related animation and video games. Their background certainly shines through with the massive amount of fan service in each episode. You are just about guaranteed to get a couple of panty flashes, torn shirts and fully exposed breasts in each episode. I’m not a massive fan of fan service but I will say that in this instance it is at least treated with humour and has a good story to back it up. 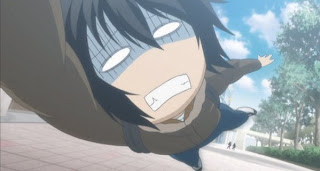 The animation is actually very good although seemed to suffer from “porno syndrome” at times where lines are softened and all colours seem to be a shade of pastel. That being said, it doesn’t take away from the series at all and does give it a unique feel. The action sequences are a lot sharper, bright and bold. The character designs are much better than one would expect from a harem/fighter series although it certainly won’t win any fans from feminists. All of the females are ludicrously disproportioned with tiny waists, massive breasts and bubble butts. At times it almost feels as though they are about to snap in half. That being said, the women are strong, physically and emotionally and aren’t at the mercy of their male counterparts.
The music is catchy although falls short of being great. The opening and closing themes are sung by the Japanese voice over artists and accompanied by action shots of our protagonists. 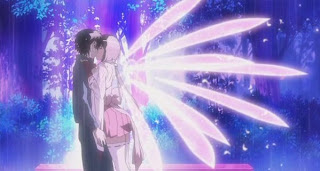 A great quality English dub is provided by Funimation. It deviates quite a bit from the original Japanese track although never enough to really change anything. Alexis Tipton and Joel McDonald provide the voices for Musubi and Misato respectively while Saori Hayami and Shinnosuke Tachibana provide the Japanese vocals.
Madman have done a good transfer on this title with very few artefacts visible and a very sharp picture throughout. Included as extras on disc 2 are the textless opening and closing songs and “Kusano’s First Shopping Trip” a single episode OVA.

A second series of Sekirei finished airing in Japan in September 2010. Funimation have picked up distribution rights within the US but the Australian rights are still unknown.
The complete series 1 of Sekirei is available on a 2 disc DVD set from Madman from tomorrow, 12th of January 2011.
animation Anime Fan Service Madman Reviews Sekirei