Xam'd: Lost Memories Collection 1 has been released on Blu Ray and DVD here in Australia by Madman. Initially released on Sony's PlayStation Network, Xam'd takes place on Sentan Island, a beautiful locale which was thankfully isolated from an ongoing war between the Northern Government and the Southern Continent Free Zone, isolated until now. The story begins by introducing us to our main players, the male protagonist Akiyuki, love interest Haru and a mysterious female foreigner Nakiami.


First and foremost, the most disappointing thing about this series was that I was only able to review it on DVD. The animation is so beautifully rich, vibrant and sharp. I can only imagine how incredible it would have looked on Blu Ray. There are some gigantic battle scenes that are fast paced and frenetic. Giant monster like beings called "human forms" use brightly coloured discharges to level buildings and raze terrain. The effect is a wonderful juxtaposition between the subdued and natural palette of Sentan Island and that of the alien attackers. The animation is as fantastic as one would expect in a co-production between Sony Computer Entertainment, Aniplex and the always brilliant Bones. 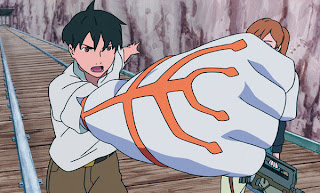 The story left me somewhat confused at times, in no small part due to the gigantic cast. Between our main cast, the goodies, the baddies, the monsters and the hanger-on-erers it is quite easy to get lost. This issue is a massive catch 22 because it is the characters that make this series so fantastic. Just like with RahXephon and Eureka Seven, I came for the animation but stayed for the characterisation. Each one of our players has their own personalities, their own quirks and ticks. This doesn't sound like such a big deal, however, such believable characters and relationships are more difficult to find than one might think. This is no doubt thanks to first time master director Masayuki Miyaji, a Studio Ghibli alumni who cut his teeth on Mei and the Kittenbus, Eureka Seven, Scrapped Princess and Spirited Away. 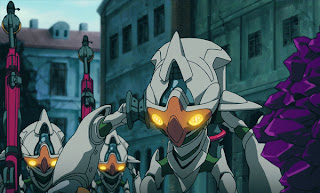 The character designs in Xam'd are both fresh and timeless thanks to freelance animator Ayumi Kurashima who is responsible for animation and design on RahXephon, Eureka Seven and Ouran High School Host Club. While instantly identifiable, all of the characters are individual and varied. The mecha designs are organic and alien which makes them look more other-wordly than man made.

The music in Xam'd is another high point. The SFX and background ambiance of the series are both electrifying and ambient. The score itself is composed by Michiru Oshima famous for her work on the FullMetal Alchemist, Godzilla franchise and a number of Nintendo's Zelda properties. This is a soundtrack that I would be more than happy to have in my CD collection.

I can't pass judgement on the entire series as I have only watched the first 13 episodes. But from what I have seen, this is head and shoulders above any other series that I have seen in quite a while. The production values are that of a feature film. Beautiful artwork coupled with a wonderful soundtrack and believable characters in incredible situations.

Madman are due to release the next and final 13 episodes in Xam'd: Lost Memories Collection 2 on Blu Ray and DVD on the 16th of March 2011. If it is anywhere near as enjoyable as the first half I'll be champing at the bit to get my hands on it! 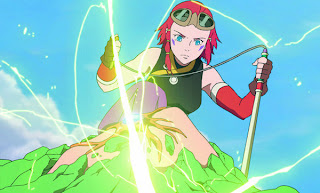