Based upon the smash hit manga series by Toboso Yana, Black Butler (黒執事) tells the story of young Master Ciel Phantomhive. After watching his parents brutal murder he made a deal with demonic forces to ensure vengeance on those responsible. Vengeance comes in the form of his trusty butler, Sebastian, on hell of a butler. After Ciel has achieved the vengeance he so desires Sebastian is free to consume the soul of his dear, beloved master.


Set against a pseudo-Victorian era backdrop with steampunk elements it mixes fantasy, horror, comedy and a touch of yaoi to achieve a very engaging and bloody addictive series.

Originally serialized in 2006 in Square Enix' shonen manga magazine Monthly GFantasy, it achieved incredibly impressive sales in a very tough market. Sales figures across the board generally landed the series in third place surrounded by legendary series' Bleach, Naruto and One Piece. Sales figures such as this are nothing short of amazing. Considering that it was created and marketed towards the shonen market it would certainly appeal to the shojou and yaoi markets. Sebastian is a cool headed, charming man who attends to his masters every whim becoming closer and more invested in his master with every episode. 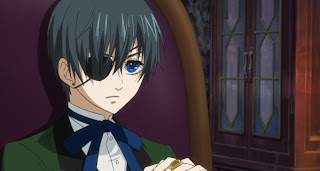 The animation is of a very high standard, as one would expect from A-1 Pictures, a subsidiary of Aniplex. That being said, it's not up to the same standard as Birdy the Mighty: Decode which was released 2 years earlier. Where the animation truly shines is in creating a believable backdrop in merry old England and the Phantomhive manner. This assists in dragging the viewer in and instantly establishing a grounding for the series to come. 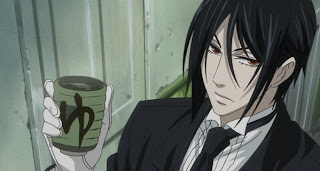 The story itself is fantastic. I wasn't sure of what to expect and therefore pleasantly surprised. It thankfully manages to be dark and fantastical one minute and hilarious the next. When the proverbial hits the fan Sebastian is a supernaturally deadly force that lays waste to everything and everyone in his way. However, when his master needs him he is stoic, solid and attentive. This gives the whole series a yaoi undertone. There is an obvious affection between the two that manages to keep from being creepy or perverse. Ciel does manage to wind up in Sebastian's arms a fair bit though...


The supporting characters such as Ciel's other servants Bardroy, Mey-Rin and Finnian are mostly used as comic relief and manage to lighten the mood between the main story. Sadly in the English dubbed version, their English accents are somewhat atrocious. This isn't as much of a negative as one may think thanks to the fact that they're used as gags. 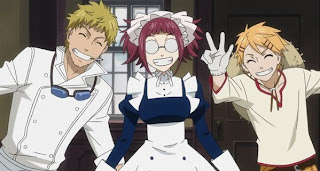 Black Butler is being released locally by Madman based upon the FUNimation release from the US. The sound quality is great in 5.1 English and 2.0 Japanese. The soundtrack is for the most part unremarkable with the most memorable piece being the ending theme "I'm Alive" by American singer Becca who also manages to get her profile included in the special features on disc 2. Other special features include commentaries on episodes 1 and 7, textless opening and closing and a summary episode.


I can't quite put my finger on what makes this series so enjoyable but it really is. It has the appeal of Vampire Knight while appealing to an audience far greater and more diverse. All of the characters are likable and evolve as the series progresses. Ciel in particular grows from a spoiled rich kid into an honourable young nobleman.


Black Butler collection 1 is available locally from Madman from the 20th of April 2011. Luckily for you the good people at Madman have the first 2 episodes available to stream from their Screening Room for free!!!