FLCL, or Furi Kuri to the cool kids, is a beautifully, nonsensical, mind trip of a series from the masters of madness, Gainax (Neon Genesis Evangelion). Also involved in its production was Production IG (Ghost in the Shell), some pedigree huh?!?


Naota is a sensitive and generally responsible kid who lives an extremely boring life, that is, until he is mowed down by a bass guitar wielding, Vespa riding alien. Things get even strangers when robots start sprouting from Naota's head....


There is no other way to describe this series than to say that it is all kinds of crazy. Thankfully it's also crazy fun.

Released in 2000, FLCL has been a mainstay in many anime fans "favourites" list since its release. Mine included.

The animation itself is nothing short of brilliant. Even though it's over 10 years old it holds its own against anything released within the last 5 years. This is testament to how masterful the folks at Gainax and Production IG truly are. Everything from the backgrounds to the character designs are so original and well executed that it is easy to forget how crazy the entire series is. 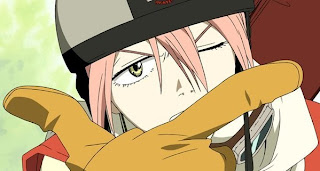 There are so many WTF moments in FLCL. Even so, the cat ears, robot head growths and manga cut scenes are somehow overshadowed by a dark and sinister undercurrent that explores Naota's implicit youngest child syndrome while he lives in the shadow of his older brother, a successful baseball player. Without this the series could easily have fallen flat and wound up being a mess of absurdity. That's not to say that FLCL isn't absurd, it really, really is... it's a catch 22. 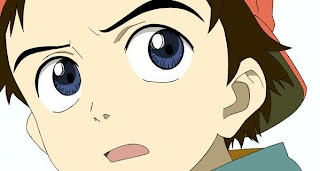 The music of FLCL is another shining star. Japanese punk/pop masters The Pillows supply a consistently brilliant soundtrack consisting of original songs "Ride on Shooting Star" and "I Think I Can". A total of five themes by The Pillows were contributed and every one of them is fantastic. I own both the FLCL soundtrack and a number of albums by The Pillows and it's all great, a wonderful power pop/punk rock blend that manages to be fun and highly infectious.

Madman's Blu Ray release is superb! The picture is so incredibly crisp and vibrant that its hard to believe that the original material is over a decade old. As such, and due to the fact that it was originally created for television, FLCL is presented in a 4:3 aspect ratio. This is no fault of Madman's, instead just its native format. When you insert the disc you're presented with a fantastic animated menu which leads us to the special features. With the Blu Ray version of FLCL we get directors commentaries for all 6 episodes, videos of five songs by The Pillows, the official film clip to "Ride on Shooting Star", English voice over outtakes and trailers for some of Madman's other Blu Ray releases. I just wish Madman would start putting PS3 themes on their Blu Ray releases. How cool would it be to have a hi-def FLCL theme on the dashboard?!?! No? Just me?

I must sound like I'm gushing a little bit but this truly is a sight to behold for any anime fan. FLCL is a a journey into madness. In every sense of the word, FLCL is an assault on the senses. It's beautiful animation, rockin' music and unashamed insanity make it difficult not to love. It's the kind of series that you can take as much or as little as you want from. It's nearly impossible to explain because its nearly impossible to understand. Insane yet incredible.