Honey and Clover is a slice of life series based upon the josei (womens) manga series by Chica Umino and published in English by Viz. This review is solely for the first collection of Honey and Clover which is released locally by Madman.
The impact of the series is just as impressive as the series itself. It showed that a story about a handful of adult university students could be engaging and successful without even a mention of monsters, ninja or nude girls. It played around in the best seller lists alongside Bleach and Naruto, the usual stalwarts, and it is easy to see why.
Yuuta Takemoto is your typical second year art student and lives your typical college life. Being a struggling student, Yuuta shares accommodation with Morita and Mayama. Their routine rarely changes until Hagu-chan, a prodigious and diminutive girl joins Yuuta’s art class. Ladies man Morita blocks Yuuta’s every attempt at getting closer to Hagu-chan who, unfortunately, is utterly terrified of boys. Honey and Clover is a roller coaster ride of emotion as each character evolves and matures, solidifying their friendships and growing from kids into young adults. 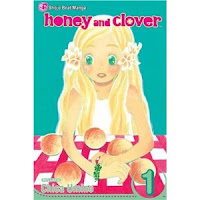 In a nutshell, this is the core of the series. Although it sounds rather weak it is delivered wonderfully and manages to create a cast of characters that both soar and suffer from their own idiosyncrasies. From the very first episode the characters develop and become more self aware, which in turn allows them to become more aware of others. This is perhaps the reason for the series success in . It shows that the youth of today aren’t all free loading scallywags, they are just young adults who transform, day by day, into the thoughtful adults of tomorrow. Our main character, Yuuta, is somewhat of a luckless loser who eventually grows into a man with the ability to seize the moment and create his own luck. Just like with the TV series “Friends” I found myself wishing that I had a social circle like this bunch. 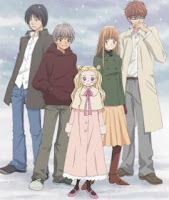 The animation was produced by JC Staff and it is lovely. It takes cues from its manga heritage and delivers a colour palette reminiscent of a water colour painting. All of the characters are well defined and compliment their personalities that shine through each story arc. Although reasonably subdued, the animation style quickly shifts to silly and comedic at the drop of a hat before seamlessly shifting back into an emotional scene.
Another triumph in this series is the music which starts with Yuki’s stop motion opening sequence before rolling into a number of entirely different yet equally beautiful instrumentals. It is during these moments that our characters explore the fear of rejection and burgeoning love that all viewers could relate to. What makes Honey and Clover so special is that exploration, the internal anguish of being so madly infatuated with someone, having them so close yet not being able to verbalise those emotions for fear of crushing defeat. These painted characters exude such real emotion that it puts many real people to shame.
Honey and Clover collection 1 and 2 are available on DVD from Madman now!
Anime DVD Honey and Clover josei Madman Reviews Shojo YUKI