Freshly released by our pals at Madman is Strike Witches Season 1, the story of a rag tag group of magic wielding young ladies with fighter planes for legs and an apparent dislike of pants. These super moe girls fly around and shoot up alien bad guys with big guns… and no pants…

In all honesty, that is the most basic explanation for the series. Based purely upon that outline it would be very simple to skip Strike Witches and pick up just about any other series, thankfully however, there is a lot more to this story than meets the eye. This anime series is based on a strong foundation that was laid by its light novel and manga predecessors to deliver a fan service filled action/adventure series with a nice, and unexpected, dose of heart.

Set in the mid twentieth century on an alternate earth the Strike Witches are a bunch of magically gifted young women who have been recruited by the military to protect the world against an ongoing threat from the alien Neuroi. The Strike Witches equip Striker Units on each leg which closely resemble WWII fighter planes such as the Spitfire and Tigermoth. These Units have propellers attached to the bottom which allow the Strike Witches limited flight time, just imagine Astro Boy’s red jet boots if you’re having trouble visualising it. The Strike Units were created by the father of our main protagonist, Yoshika, who has joined the Strike Witches in order to search for her long missing father. 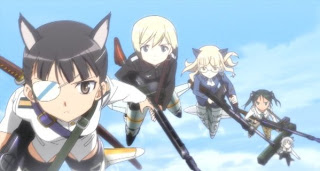 I sometimes struggle with the extreme and overt use of fan service and at times Strike Witches can be a massive overload. None of the female characters, bar one, wear pants and some of the angles at which we see these girls leaves very little to the imagination. There are a few bath scenes and you’ll see more boobs than even NSW Parliament boasts so it’s definitely not for the kids. But as long as you can get past this Strike Witches is a thoroughly enjoyable series. In fact, I was impressed by the perfectly reasonable explanation for the lack of pants! The Strike Units rely on almost complete contact with the users skin in order to work. Due to the continual attacks by the Neuroi, the pilots are always on standby and instead of whipping off their pants they just don’t wear any. This fashion has become commonplace as even those outside of the military walk around with no duds on, presumably to emulate the heroes of the 501st. 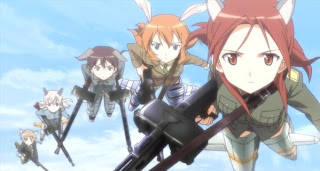 The animation is just as wonderful as you would expect from Studio Gonzo. Their integration of CG and traditional art is bordering on flawless. Gonzo consistently fail to disappoint me. The character designs are fantastically diverse and oh so moe, even more so when they don animal ears and tails. This slight transformation occurs when the witches use their magic. They take on the attributes of their animal familiars which also enhance their magical abilities.

The art is beautiful and so are the characters but most surprisingly is that this series has heart. There is a series undertone of love, loss and friendship. All of the young ladies in the Strike Witches have lost something, or someone. Whether it be their homeland, family, friends or identity, they are all searching for something to heal old wounds. They come together to fight a common threat and through the use of magic and machine guns they form a family… a moe, pants-less family. 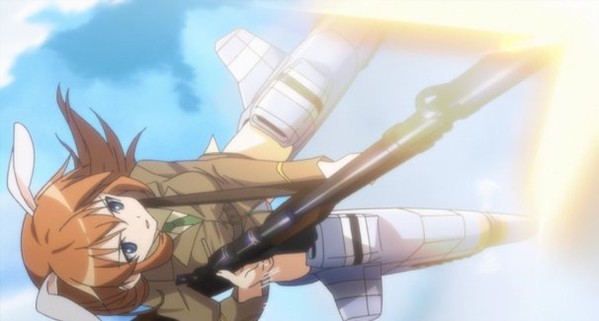 If you like pretty girls, guns, fighter planes or all of the above Strike Witches is definitely worth the watch.