"A Boy’s first computer. A country boy from Hokkaido, Hideki arrives in the big city (Tokyo) to go to college. Instantly, he is shocked and amazed by the variety and prevalence of Persocoms: personal computers designed to look and act like animals or even people! Too poor to afford one of his own, Hideki is overjoyed to discover a discarded Persocom in a trash heap. However, this gift of fate turns into a mystery as his Persocom, Chi, appears to be able to operate without her OS... How real is real?"


More than 9 years after its original Japanese release and 6 years since Madman first released Chobits on DVD, Hideki, Chi, Shinbo and Sumomo make their way to Blu Ray in this complete hi-def collection.

Written by CLAMP, the all-female manga creating dynamo behind titles such as Cardcaptor Sakura, xxxHolic and X, Chobits is a break from CLAMP's usual shoujo style and falls reasonably firmly into the seinen category. We follow Hideki's journey from a clueless country boy to much more of a man who is experiencing love for the first time. The relationship between he and Chi seems to blossom although the audience is often left wondering "does she really have feelings for Hideki or is she merely mirroring his actions?". It is these moments that are guaranteed make you both gush and cringe. You will no doubt gush at the way that the farm boy and his new infatuation fall headlong into an incredibly cringeworthy relationship, after all, she is a glorified Dell! 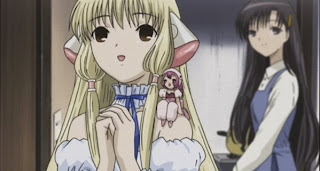 The animation and character design style fits somewhere between that shoujo and seinen. There are no androgynous boys and the colour palette is somewhat subdued. One thing that tends to stand out is the lighter shades used for outlines and in place of harsh blacks in many cases. This gives an overall softer, watercolour feel. Being animated by Madhouse basically guarantees some great quality animation and thats exactly what you get. There are some fantastic scenes where the animation style varies between the soft watercolour feel to a brash and vivid cartoony visual highlighting comedic elements. 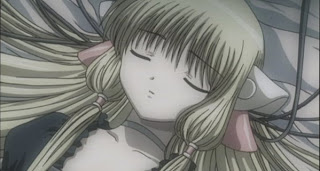 There is so much to like about Chobits. All at once director Morio Asaka manages to create a series that is equally earnest and emotional as it is sexy and hilarious. Asaka-san is well known for his work on Nana, Rozen Maiden and another CLAMP title Cardcaptor Sakura, all of which have strong female lead characters. A deft touch from Asaka-san ensures that although Chi is obviously the object of Hideki's affection she isn't treated purely as a piece of eye candy (although she is cute as a button). 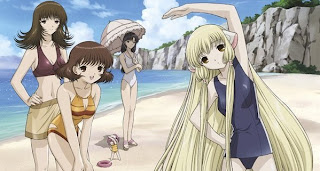 I originally bought the first volume of Chobits on DVD when Madman released it in 2005. As with most "volume 1's" they included a nice, sturdy collectors box. As much as the box was pretty and held the collection together, it took up a hell of a lot of space. Chobits on Blu Ray comes in a standard sized Blu Ray case and includes all 26 episodes on three discs. Also included are "chats" with the characters, special Chibits featurettes, textless open and closing sequences and the usual Madman propaganda. I enjoyed re-watching Chobits just as much as I did the first time, many moons ago. This is a series that has something for everyone and could be the perfect way to introduce your "significant other" to the amazing world of anime.


The Chobits collection on Blu Ray is available now from Madman. If you don't have a Blu Ray player the still have the collection on DVD available.
Anime Chobits Madman Review