Before we get started, Durarara!! is supposed to have both exclamation marks. I promise it's no mistake.

When I was in Japan in 2010 there was DRRR!! merchandise EVERYWHERE! (I feel like one exclamation mark just isn't enough anymore...) Merch included everything from phone mascots and pencil boards to milky flavoured sweets and even a range of perfumes! The Ikebukuro branch of Animate is the companies flagship store and coincidentally the same city in which DRRR!! is set. The popularity of Durarara!! in itself has spurned a tourism boom within Ikebukuro.


"At the invitation of his childhood friend Masaomi, Ryuugamine Mikado transfers from his home in the country to a school in the city of Ikebukuro. Masaomi has warned him about people he doesn't want to cross in the city: a champion fighter, an informant, a pharmaceutical company who is commissioning the abduction of women off the street, and a mysterious gang called "Dollars."
Nervous in the labyrinth of Ikebukuro, Mikado witnesses an urban legend on his first day in the city – CELTY STURLINSON: a headless, black-clad motorcyclist who rides the streets with no headlights searching for its stolen head. From then on, the existence of the supernatural and a gang called the Yellow Scarves will rise to the surface…Ikebukuro will be pushed to breaking point!"

Locally, Siren have released the complete series across 3 two-disc volumes which are all enclosed in a high gloss cardboard slip case which gives the DVD's a touch of exclusivity and collectibility. It is extremely difficult to review this series in individual volumes as each of the three delve deeper and deeper into madness. 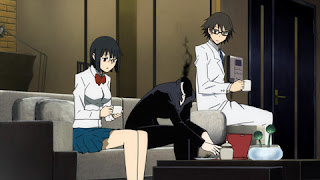 The cast of DRRR!! is massive and includes a headless horse(wo)man, a super strong bar tender, a black Russian sushi chef, a murderous information trader and so on and so forth. At the centre of all of this insanity is Ryuugamine, a seemingly normal high school kid with an old fashioned name who has just moved to the bustling town of Ikebukuro for school and adventure. Initially the cast appear to be seperate and a little boring, although, within the first 3 or 4 episodes we start to see that their relationships may not be as random as they appear. The characters aren't exactly believable or even relatable because of how crazy their situation is. That being said, the interactions and growth of relationships show the true heart of DRRR!!!
Released in 2010 and produced by Studio Brain's Base (Baccano!, Spice & Wolf II) the visuals are just as clean and crisp as you'd expect. The digital transfer showed a small amount of artifacts and some stepping on black lines. These things aren't particularly noticeable but they are there nonetheless. One striking feature of DRRR!! is the way that people in the background and crowd scenes are coloured entirely grey. This not only diverts attention solely to the main characters but also gives a sense that even in such a bustling city as Ikebukuro our protagonists are generally alone. A sea of people does not equate to a social network. 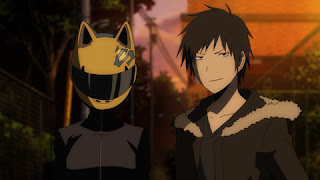 The animation is really great. Visually, the cast of characters are fantastically diverse and the backgrounds are true to what I've seen along Meiji-Dori and Otome Road. There are even moments with Baccano, Darker than Black and Spice & Wolf posters and cut-outs. The vast yet cramped city reinforces the realism of the background and helps to make Ikebukuro a character in its own right.
All individual story lines begin to converge at the end of volume one to reveal a much grander plan that was obviously laid well before we even meet young Ryuugamine. This is where the storyline shifts from wackiness to a well formed and mysterious supernatural crime story. 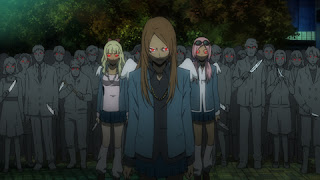 The soundtrack, supplied by Makoto Yoshimori, is an extremely eclectic mix encompassing jazz, blues, traditional celtic and the j-rock opening and closing sequences. Although entirely disparate, the soundtrack never clashes and acts as a glue to bring together scenes where a thematic juxtaposition is apparent.
It is easy to see why this series gained the popularity that it did. Durarara!! has a strange, supernatural storyline that is grounded by its real world setting and a crazy bunch of characters that are all pieces of a greater picture. When all of these pieces come together they form a thoroughly enjoyable series.
Durarara!! Volumes 1, 2 and 3 are available locally from Siren Visual.


Also, for my fellow Sydneysiders, the good people from Siren will be at Supanova pop culture expo this weekend, 17-19 June 2011.
Anime DRRR Durarara Reviews Siren Visual