Released on DVD locally by Madman, Mobie Suit Gundam Unicorn takes place in the same timeline as the original series, Mobile Suit Gundam, and is based upon a novel by the same name by Harutoshi Fukui.
"The year is U.C. 0096. Three years have passed since the end of the Second Neo Zeon War.
It is said that the Vist Foundation manipulates the Earth Federation and Anaheim Electronics from behind the scenes. Hoping to create a new world, the Foundation attempts to hand over a certain secret to the Neo Zeon remnants known as the Sleeves. This will mean the opening of Laplaces Box, which holds a great secret tied to the origins of the Universal Century."
One of the most worrying thing for those new to the Gundam franchise is the 32 years worth of story to catch up on. This can easily scare off prospective viewers and had actually scared me off for quite a while. Thankfully, Unicorn fills in many of the blanks before it jumps head long into action. Directed by Kazuhiro Furuhashi (Ranma 1/2, Rurouni Kenshin), Unicorn is a grand and theatrical space opera that will warrant multiple viewings. Although each volume only runs for 50 minutes, there is so much going on that you are bound to watch it again and again. Also, due to the frenetic nature of this volume what is supposed to be 50 minutes feels more like half an hour. 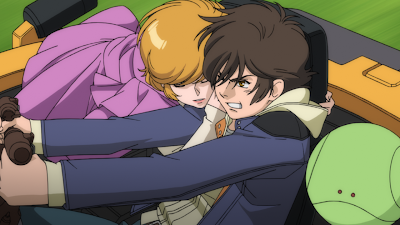 The animation in Unicorn is incredible, especially considering that this is the first part of an OVA and not a feature film. The character designs have somewhat of a retro feel. As an example, Banagher and Audrey's hair has an 80's style lick to it, similar to that seen in Space Adventure Cobra. This makes the Gundam design all the more striking. Painted all white, the titular Gundam RX-0 is the most advanced and detailed Mobile Suit ever. Shots from the cockpit show that designers went to great lengths to enhance the reality of the series. The controls of the Gundam appear complex and deliberate. The unit itself transforms into "Destroyer Mode" which alters the appearance its strength. The transformation of the unit is also more believable than other series as components slide into place instead of magically separating, bending and appearing from nowhere.

The picture is so beautiful and it would have beengreat to see it on Blu Ray, Madman decided not to release this series on Blu Ray purely due to price. Product Manager Dan Chlebowczyk stated that the only way of releasing a Blu Ray edition was to buy the discs from the American license holder, Bandai Entertainment, and reselling them for an estimated $50 AUD! At that price I can't imagine they would have too many takers... 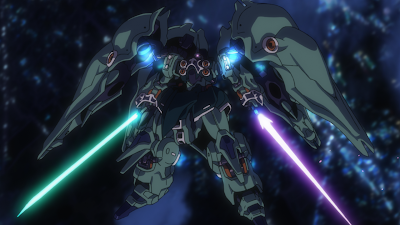 The story itself feels as though it just gets started when the episode finishes. We meet Banagher, Audrey and the mysterious CardeasVist, accompany Banagher and the RX-0 in a space battle against the Sleeves ace pilot Marida Cruz and his mobile suit the Kshatriya. The designs of the space colony are wonderfully detailed and immersive but everything else pales in comparison to the space battles which move at a blistering pace. The Gundam designs and attack strategies manage to give personality to each hulking piece of metal. These giant robots manage to become characters and not just weapons wielded by soldiers. The age of Gundam pilots appears to be a common theme and a commentary on the age of soliders in war while also highlighting the importance of youth and the part that they play in society. 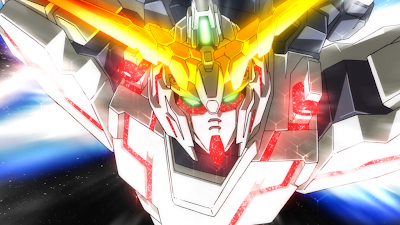