Super 8 is the latest film by JJ Abrams which follows six young friends who, whilst making a film, witness a military train derailment. Unbeknownst to the kids is the nature of the cargo on the train and the conspiracy that has now engulfed them. The film is quite ambitious as it explores such things as first love, grief, parental responsibilities while at the same time being a traditional monster film.

Early in the film we meet Joe Lamb (Joel Courtney) who has recently lost his mother in an industrial accident, Joe’s father Jackson Lamb (Kyle Chandler) is the town’s deputy sheriff. Joe makes a film with his friends Cary (Ryan Lee), Preston (Zach Mills), Alice (Elle Fanning), Martin (Gabriel Brasso) and Charles (Riley Griffiths). The six friends sneak out to shoot a scene for a film being directed by Charles on location in order to provide ‘production value’ however the friends could never imagine the disaster they're about to witness. What follows is a truly spectacular sequence in which an entire train is derailed. The scene has a real sense of danger and immediacy lacking in most computer generated set pieces nowadays.
The train derailment sees the military arrive and attempt to secure their cargo which has escaped from the crash site. As the military takes over the town the kids are forced to investigate the strange goings on and attempt to locate the mysterious cargo. The race against the clock aspect of the film is quite interesting with overlapping plot lines and some true moments of suspense. It has been far too long since we have been treated to a film about kids setting out on an adventure much bigger than them.

JJ Abrams is a talented and stylish director, who has recreated a 70’s era nondescript Middle American town in which you wouldn’t be surprised to see characters from Richard Linklater’s Dazed and Confused or George Lucas’ American Graffiti cruising around. He takes his time to flesh out this world by way of costume, set design, casting and importantly the film’s impressive soundtrack. The most notable aspect of his direction is his patience to let the camera linger for a few precious seconds when required, this allows the scene to speak for itself and removes the need for large amounts of clunky exposition, which has plagued many recent blockbusters. Abrams displays his deft touch in a scene shared by Alice and Joe during which they sit an watch a short home movie together, this scene could have easily been cliché and nauseating but instead helps convey some of the crucial themes of the film and allows for a strong emotional pay off later in the film. Audiences aren’t stupid; they can connect the dots if a skilled story teller lays them out appropriately.
My only criticism of this film is that the middle act dragged slightly and there was too much focus put on building the suspense surrounding the cargo of the train. There was one too many scenes of characters having an encounter with monster during which we were only treated to a series of reaction shots. As alluded to earlier JJ Abrams is a stylish director who can blend special effects in quite seamlessly to his films, however he appears to have a fascination with lens flares which are quite distracting. In a similar vein to his 2009 Star Trek, the blue flashes of light across the screen stand out way too much. 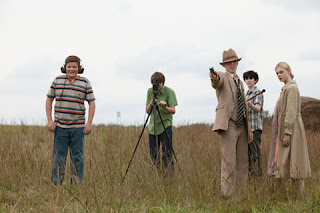 Super 8 is produced by Steven Spielberg which may be the reason it has such a grounded and honest feeling, this would also explain why the kids ride their push bikes everywhere they go. It has traces of E.T and the Goonies and attempts to capture the same sense of adventure and innocence these films did. It may be a touch of nostalgia why we enjoy films like this because it takes us back to our childhoods and the films we enjoyed, or it may be because it’s just a simple tale told well. Either way Super 8 is an enjoyable film which will hopefully stand out in a season filled with super heroes and endless sequels. Original stories haven’t died, they are merely just waiting for someone to tell them properly.
A massive thanks go to my good pal Stu for this fantastic review.
JJ Abrams Movies paramount Reviews Spielberg Super 8