You liked Cowboy Bebop, right? Of course you did! Who didn't. Well, just in case you didn't know, Shichiro Watanabe, the writer and director of Cowboy Bebop also made a little series called Samurai Champloo, a re-imagining of Japan circa Edo period.

"Mugen's a buck wild warrior: violent, thoughtless and womanizing. Jin is a vagrant ronin: mysterious, traditional, well-mannered and very strong. These two fiercely independent warriors couldn't be more different from one another, yet their paths cross when Fuu, a ditzy waitress, saves them from being executed when they are arrested after a violent swordfight. Fuu convinces the two vagrant young men to help her find a mysterious samurai "who smells of sunflowers." And their journey begins."

Director Shinichiro Watanabe creates an old timey Edo period world while at the same time, infusing hip hop tracks from the likes of Fat Jon, Nujabes, Tsutchie and Force of Nature. The word “chanpuru” is Okinawan for “to mix”, which explains the juxtaposition between the time period and choice of sound track. It is a mix of an immediately identifiable music style and a setting that is only known through history books and cinematic reinterpretation and yet some how, it works. Hip hop tracks add some fun and attitude to a series that already has it in abundance. The music is a surprisingly befitting companion to our main character Mugen, the steel geta wearing, wise cracking, wanderer who fights with a style very similar to Capoeira. Jin however acts as a more traditional link to the time period as a more conservative and stoic ronin. The two play off each other well with lashings of contempt towards each other which slowly evolves into mutual respect. 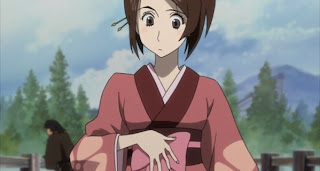 The animation is produced by Manglobe Inc, the same studio that is responsible for other fantastic work such as Ergo Proxy, The World God Only Knows and Deadman Wonderland. Fast paced action and beautifully rendered backgrounds combine to create a wonderfully rich samurai epic for the modern age. Many scenes use more subdued colour palettes and soft lines which add to the overall feel of the series but tends to be counterproductive to the HD Blu Ray release as the definition just isn’t there. That being said, the animation and artwork is really top notch. It may not be eye poppingly sharp but in making this sacrifice, the overall feel of the series is all the more engaging. 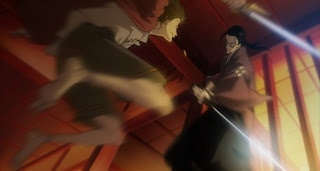 The special features on the Blu Ray collection are a little lean, consisting of the opening theme promo video, creditless closing animation and some concept art. It would have been great to see some cast or crew interviews but as far as I know, they were never included in the US release so can’t be expected on our fair shores. 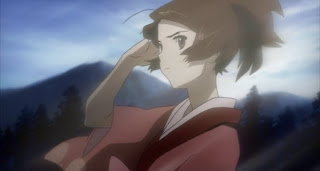