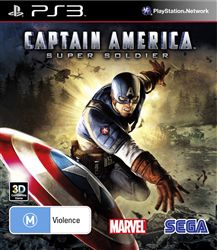 Released to coincide with the film release, Captain America: Super Soldier is a third person action/adventure game from Sega and Marvel. You get to control Cap as he smashes an bashes his way through hordes of Hydra soldiers, wielding the shield like only Cap can.

"Become Captain America™, the ultimate Super-Soldier, as you face the Red Skull’s army in this gripping original third-person action adventure set in the darkest days of World War II. Wield Captain America’s legendary shield to take out enemies at a distance, interact with your environment, and deflect incoming fire back at foes as you traverse Hydra’s massive castle to save the world from Cap’s villainous archenemies.

Get ready to hurl yourself shield-first into the fray—create your own superhuman feats with the superior force of the world’s first Super-Soldier at your fingertips."

Voiced by Chris Evans and bearing his likeness, Cap is first introduced to us in a semi-tutorial which is more or less lifted from the film. Finding himself in an aircraft piloted by Howard Stark, Cap lunges headlong into Hydra occupied territory. The combat system is somewhat reminiscent of Arkham Asylum although not quite as polished. Slow mo finishing moves give a great sense of theatrics and make give impact to the final blow. Different button combinations allow Cap to finish off prone opponents, weaponise firearm wielding foes and deliver bone crushing rib shots or some sweet chin music. But this isn't the only way to dispose of the enemy. Rogers can always toss his trusty shield, either targeting the nearest enemy or by entering into a manual targeting system which allows you to explode nearby fuel barrels or access new areas by busting open locks. 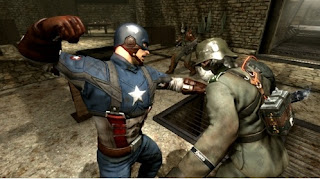 Searching hidden areas and not so hidden areas allows you to accumulate extra experience points which open combat upgrades to make Rogers and even more potent weapon. These collectibles also unlock background information on the Red Skull and concept art. The collecting of Hydra documents and schematics is generally pretty straight forward although certain items are a little trickier to get to. Generally concealed behind a puzzle of some sort, the game manages to break up the constant head cracking by allowing you to slow things down, think, and regroup. But when the action starts back up things get even more interesting. 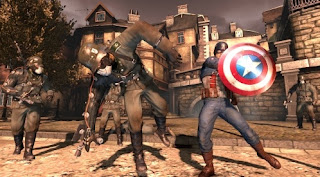 The animation is well polished and has some great quality use of light and shadow. Textures are detailed and movements are fluid and natural. The physics, however, somewhat miss the mark. Once defeated, Hydra soldiers tend to fold in half, making for unnatural but hilarious results. This is only a minor gripe and in no way detracts from the overall enjoyability of the game. This game is just like the movie. It celebrates Jack Kirby and Joe Simon's position as a shining beacon of justice in the time of most need. It is a very enjoyable game which is unfortunately a little lean on the replay value although the addition of a "challenge mode" will have you playing long after the story has finished. As an added bonus, DLC packs containing Cap's "Ultimates" and "Classic" costumes are also available. Captain America: Super Soldier did a lot of things right and only faltered on some minor issues. All in all a good fun game and a worthy addition to the growing collection of Marvel properties.
Captain America: Super Soldier is available now on PS3, Xbox 360, Wii and Nintendo 3DS.
captain america chris evans Games PS3 Reviews Sega