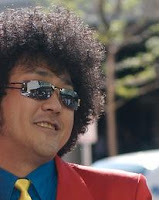 Just when you thought that SMASH was well and truly done, it is my honour to bring to you my interview with Shinichi "Nabeshin" Watanabe. The director of Excel Saga, Gravitation: Lyrics of Love, The Wallflower and Puni Puni Poemi, he is the red jacketed, afro haired firecracker of the Japanese animation scene. Looking like an extra from Warren Beatty's "Dick Tracy", he (and his interpreter) took the time to have a quick chat to me while in Sydney for SMASH.

Ryan: You are best known as the director of Excel Saga and for your portrayal of Nabeshin in Excel Saga. Was it tiring working 2 jobs on the same animation?

Nabeshin: Actually, I played 4 roles! I was the director, a voice actor, I wrote the lyrics for the opening theme and I also did the storyboards so yes, it was very tiring!

I ask because it was tiring to watch Excel Saga! It is so crazy and fast paced that at the end of each episode I needed to lay down! How long until you got your energy back?

I played 4 roles but I didn't do any of them seriously so it was no problem to get my energy back (laughs). I do that as much as I can. 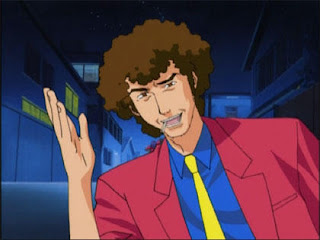 Most of your work s in comedy. Do you think that comedy is especially important in Japan at the moment?

With the earthquake and the problems with radiation there is a kind of dark atmosphere in Japan. This is why I think that it is important to have comedy animation, to try and make people cheerful.

What are some of your favourite anime that you weren't involved in?

The animation that I'm not involved in, I don't consider it real animation so I don't watch it... (laughs). I'm only joking! (laughs)

Have you always been a fan of animation? Since you were a child?

We had a TV when I was a child and the only TV shows that I watched were animation. When I turned into a high school student, I decided that I had to stop watching animation. So instead I decided to ride a motorcycle and try to pick up girls. That was what I preferred. But as I got older I decided that its better to do it all at once, getting girls, riding a motorcycle AND making animation. The best advice in life is to do what you love.

Do you think that some animation companies and some series take themselves too seriously?

I really agree with that. In particular, the animation that I watched as a child was primarily focused on advertising the action figures that they produced. This was how they made their money back so some series just made animation to sell their toy. But now the focus is on making a TV series then selling it on DVD, Blu Ray and selling it to America so it is a little different. So nowadays it is more important to make a series that is actually entertaining so that people will want to watch it again. I think that if a series isn't fun, it isn't good animation.

Now for my finally question, when you came into the airport, did security search your hair for weapons?

When I left Japan I walked through the metal detector and it went *MEEEEP* so I had to take my belt off but that didn't help, *MEEEEP* I had to take off my shoes until the only thing left was my hair. But I am an advocate for world peace so I don't carry weapons in my hair to other countries.

Excellent, thank you so much for your time and for speaking with me. Douzo yoroshiku (nice to meet you in Japanese).

Nice to meet you (in English).

Many thanks go to the awesome folks at SMASH for organising this interview.