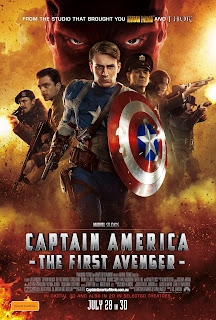 Toward the end of the filming schedule on Captain America: The First Avenger, an incredibly lucky group of international journalists (not me) were flown to London for a question and answer session with Cap himself, Chris Evans.
Bloody lucky buggers...
Q: Did putting the Captain America suit affect your performance in any way, it being such an iconic costume?
A:  “Sure. I think wardrobe in general is a pretty big deal for any character and that’s not to knock the magnitude of the suit down. Whenever you put on the clothes, it helps to bring any character to life. Of all the characters I’ve played, superhero or not, I was most excited about putting this suit on. There was a lot of build up for me to do this, a lot of sleepless nights, and then finally putting it on felt fantastic – I never want to take it off. I have real trouble with the fly though!”
Q: What was the cause of those sleepless nights?
A: “I’ll be candid, there was a couple of factors. One, I’d already done the superhero thing and I wasn’t sure how people were going to respond and I was in a really good place in my life in terms of navigating this profession. And there’s no guarantees, but this could be a potential game changer and theoretically based on the potentially planned movies, I could be doing this into my forties and that’s just a crazy thing to wrap your head around. That’s a very stressful thing to pull the trigger on, it’s a big chapter in your life to say ‘yes’.”
Q: Has there been anything that informed the way you created the character of Steve Rogers and Captain America?
A: “Well I started by reading as many comic books as I could find. I think the most helpful thing in the comic book world was finding out who he was before, especially as this is an origin tale. I think if at the end of the movie you can still see skinny Steve in Captain America, then that’s what the audiences will like and that’s what I like. On a personal level I have a friend who is a comic book nut and he is the best human being I know, he does the right thing and his morals are intact and I told him I was basing the Captain America character on him – I wish I could do his reaction!”
Q: As an actor, how do you feel about being modified by CGI?
A: “It’s certainly a different animal, sure, but you can have a lot of fun with it. I think most actors probably started out running around in their backyards playing make believe, so you just have to let yourself go but it’s kind of fun. I feel 8 years old again and I’m running around in a Captain America suit, you’re a kid all over again.“
Q: How’s it been using the shield?
A: “It’s good, it’s tricky, they have a bunch of different shields. Some of them are the real heavy legit shields that look good on screen, some are the rubber ones for stunts. But it’s cool and it’s great seeing the stuntman dressed up and thinking ‘is that what I look like? Cool!’. No, the shield is the icing on the cake.
Q: Could you tell us about the scene you’re shooting today?
A: “Sure. Today is towards the end of the film, it’s like my final big battle with Red Skull on his giant plane. I can’t say too much about why he’s on the plane but that’s where he is. So, it’s a lot of stunt work and bumps and bruises. And the set is on hydraulics so we’ll be having a lot of fun with that. Long days!”
Q: Could you talk about Steve’s relationship with his friend Bucky?
A: “It’s great, it’s a little different to the original Captain America comics where Bucky is more of a young sidekick but the relationship is still really well developed and you really care about these guys. You know they’re friends before Steve gets the injection. But I don’t want to give too much away”
Q: How grounded in reality is the action?
A: “That’s a good question and one that I had. I mean, what are the extent of his abilities? Can he jump over mountains? You want the guy to be superior but you don’t want him punching through brick walls. Basically, they equated it to the fact he would crush the Olympics and win every event, he could lift more, run faster, jump higher but he’s not perfect, he’s not untouchable. Which, humanises it I think, when he punches someone he’s not going to fly back on a cable or anything but he probably won’t get back up!”
Have a look at my review of the film here!
Captain America: The First Avenger is in cinemas now!
captain america chris evans marvel Movies News paramount