Kaiba has garnered some boisterous applause from just about every corner of the interwebs, but is it deserving or just another quirky title that hipsters of the geek world use to show how... hip... they are?

This is a world where memories can be turned into data and stored. Even if the body dies, its memories live on and can be transferred to another body. Bad memories can be erased and good ones downloaded. However, this is something only privileged can do.

In a world like this, our protagonist Warp (aka Kaiba) is travelling in another body while having no memories of his own...

From acclaimed director Masaaki Yuasa (Mindgame, The Tatami Galaxy) and featuring an evocative synth score by Kiyoshi Yoshida (The Girl Who Leapt through Time), Kaiba is a science fiction love story with a unique visual style and an undercurrent of existential longing."
I must admit that when I hear things described as "existential" or "modern day Tezuka" I tend to roll my eyes before punching the closest skinny-soy-mocha-chai-latte drinking person I can find.
First of all, I should apologise for punching that guy, not only was he right about how great Kaiba is, but it turns out that he was lactose intolerant. Oops!
Kaiba is an incredibly deep and emotionally charged visceral experience that is actually quite a difficult one to review. As much as it pains me to say, it is quite evocative of some of Tezuka's more experimental films such as Muramasa, Jumping and The Genesis. The animation style which is supplied by one of my favourite studios, Madhouse, is beautiful yet simplistic which belies its emotive intent. As with Yuasa'a other works, Cat Soup and Mind Game, it doesn't adhere to any particular "anime" themes or stylistic motif. 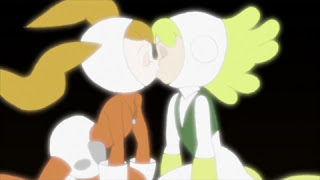 Kaiba raises many questions about memory and the physicality of emotion. In a world where memories can be saved on external devices, what purpose does the body have other than as a container for memories and emotions. If this is the case, what is the importance of a body and does it lose its ability to be the embodiment of personality? This is where the existentialism comes to the fore. It cements the series place as one which has broken so many barriers and makes watching the series feel like a triumph or something somewhat more substantial than the usual anime fare. The only downside to this is that it can be difficult to identify the characters due to their near constant body swapping. Although at times mind bending, Kaiba is best viewed with a good quality, full-bodied red. 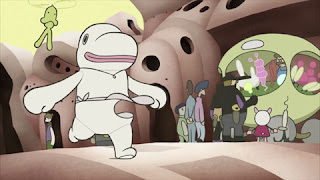 There are just as many questions answered as asked and given its abrupt finale, you could be left either angered or wowed. For me personally, I was left amazed and seeking answers to the questions left asked. This is up to you, the viewer to work out on your own and to me felt as though I was somewhat involved in the continuing yet untold story.
I appreciate Siren Visual for this release, regardless of how light it is on special features. There is no English dub and this is another reason for me to thank Siren. Instead of waiting for an American company to create a dubbed version they took it upon themselves to license a title that has dared to touch. There aren't many companies that would release a title which is such a financial risk. It certainly isn't a safe investment but if they were paid per sniffle or choked up swallow, Siren would well and truly make their money back on this unexpectedly emotional tale. That said, I still love myself some giant robots, hack and slash ninja action and slice of life high school stories. Not all anime should be like Kaiba, but that doesn't mean that it has no place. Kaiba shows us that "anime" is a term that us westerners have given to an entire Japanese medium. 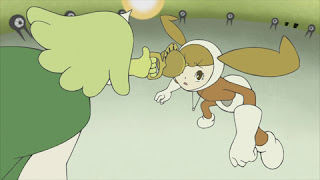 Kaiba is available on DVD from Siren Visual now and I highly recommend it for anyone who either considers themselves an anime connoisseur or anyone who refuses to believe that animation is only for kids.
Anime DVD Kaiba Masaaki Yuasa Reviews Siren Visual