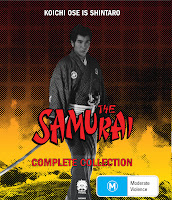 I spent the first years of my life on one hundred acres of land in a place called Halfway Creek. I shit you not. Around this area at the time we only received one TV channel so if there was nothing on, there was nothing on.
One thing that my father and I both enjoyed was watching the adventures of Shintaro in The Samurai. After watching I would run outside with a handful of beer coasters as shuriken and a tshirt around my face to play Iga's and Koga's.

The good folks at Siren are releasing the entire Samurai box set including a pack of collectors cards in the old bubble gum pack. Taste the nostalgia.

PRESS RELEASE:
In the 1960s, an 18th century samurai named Shintaro appeared on Australian television screens. With TV in Australia barely ten years old, THE SAMURAI became a surprise hit - thousands of Australian kids tuned in each weekday afternoon at 3:30 to catch Shintaro and his ninja friend Tonbei battle rivals.. Samurai mania swept the nation with children crafting their own weaponry and wreaking havoc in playgrounds and backyards across the nation, while a visit from the show’s star Koichi Ose resulted in thousands of fans flocking to greet the Samurai at airports across the country!
In Japan, 300 years ago, there were two secret societies of people who called themselves ninja. One group was called Iga the other Koga.  They were professional spies and assassins, experts in acrobatics, swordsmanship, judo, karate and hypnotism. The secret scroll of the ninja had three basic rules:
To train your body to endure any hardship.
To forget all your friends and family and keep your real identity secret.
To accept death rather than divulge any of the secret s of the society of ninja.
Siren’s reissue of The Samurai enters a new era with the introduction of a limited edition display case to house the complete ten seasons of The Samurai. Also included is a limited edition run of Samuri trading cards modelled on the original Scanlen’s trading card set, with authentic packaging true to the original bubble-gum pack. 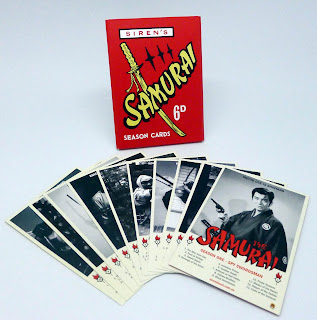