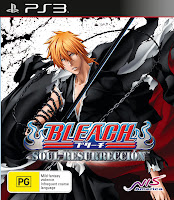 Fans of Tite Kubo's Bleach rejoice! Localised by NIS America (Nippon Ichi Software), Bleach: Soul Resurreccion will see an Australian release on September 22 on PS3 for the very first time. Not only this but the Australian release also comes with a bonus DVD!
"Based on the popular manga/anime series, Bleach: Soul Resurrección depicts the battle between the Soul Reapers and the army of evil Arrancars that threaten the peace of the world. Bleach: Soul Resurrección gives players the sensation of single-handedly destroying an army of monsters and evil spirits with lightning-fast swordfighting action. Gamers can re-live the experiences of various characters from the anime by closely following the original story. The environments are faithfully reproduced with beautiful cel-shaded 3D models that will satisfy even the most devoted fans. Bleach: Soul Resurrección will give gamers an unparalleled anime action game experience."

In the same vein as games such as Dynasty Warriors, Bleach: Soul Resurreccion is a hack and slash romp through the land of Soul Reapers and Arrancar. Already released in the USA it has gained some good reviews and appears to be a must for fans of the manga or anime series.
Other upcoming localisations from NIS include smash hit Japanese RPG's Atelier Totori and Disgaea 4.
As expected, Disgaea 4 is the fourth and latest incarnation of the best selling series while Atelier Totori is the TWELFTH in its series! Atelier... where have you been all my life?
Both with anime/manga styling, Disgaea 4 is headed for an Australian release on September 27 and Atelier Totori will hit shelves sometime in November. Head on over to NIS America for further information as well of a few trailers.
Anime Atelier Totori bleach Disgaea Games Manga News PS3 tite kubo