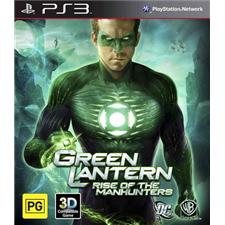 Green Lantern: Rise of the Manhunters let's us take the reigns and wield the power of Hal Jordan as portrayed by Ryan Reynolds in the soon to be released Green Lantern from Warner Bros. Reminiscent of beat em ups of old, this game actually reminded me of games like Streets of Rage, not in terms of the production values, but just in relation to the button-mashingly addictive game play. Considering that this game is based on a film which is based on a comic book, it is surprisingly fun!

After that back-handed compliment, I have to hand it to Ryan Reynolds especially. His voice overs were among the best that I have heard, especially when it comes to games based on movies. Instead of just phoning it in, it sounds as though he actually made some effort to breath life into his pixelated counterpart. The downside to the great voice over was the poor animation on the lip syncing which made old mate Hal look like a string marionette. That aside, his characterisation was fantastic.

The animation throughout was of a good quality overall. The backgrounds were well detailed and shifted from the internal structure of Biot to grandiose and epic battle scenes on OA. Don't expect any free roaming in this game as it is purely linear. Bash up all the guys you see and then fly to the next lot of guys to bash up. This isn't at all a bad thing, it keeps the story progressing and the tempo swift. I always love a bit of free roaming and the chance to discover parts of the comic/movie that only a "fan" would know but considering that this game is a beat em up, it can't really be expected. There is a little bit of discovery available when you search for blue and green meteorites that extend your health or "hope" bar. 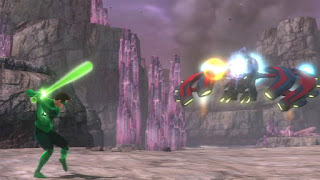 The baddies are increasingly difficult to beat and are very cool designs to boot. Smashing and bashing your way through the hordes of Manhunters is made easier by unlocking different constructs which can be created with the power of the ring. All of the constructs necessary to complete any tasks are automatically unlocked but others such as the mech suit, missile pack and jet fighter will cost you XP points. These points can be found or earned through your fighting prowess, either by destroying enemies with your cool looking blades and hammers or when flying on a set course, blasting everything that floats by the reticule. Double the fun by playing with a mate who will take control of Sinestro to assist with an old school smack down.

As far as extras go, you get a trailer for the feature film as well as a trailer for the animated feature Green Lantern: Emerald Warriors (which is the best DC animated film to date, in my opinion). The replay factor is low as there is no concept art or models to unlock, this factored with the 6-7 hour finish time puts a slight dampener on what is otherwise a rather enjoyable beat em up featuring on of DC Comics hottest properties. Green Lantern: Rise of the Manhunters from Warner Bros Interactive and Double Helix is available on PS3, XBox 360, Wii and Nintendo DS now.