Shane and Chris Houghton are a sibling team of comic book creators responsible for the recently released "all ages" phenomenon, Reed Gunther. Now published by Image, RG has been met by critical acclaim from the likes of Comic Book Resources and AICN comics. They both took the time to chat with me about Reed Gunther and their thoughts on "all ages" books.

Those who have been following my blog for a while may remember my rant about "All Ages" books. Well, I still think that they have a big place in the comic book industry. If you do too, put your money where your mouth is and pick up Reed Gunther, a book about a strange and hilarious bear-riding cowboy and his adventures in a wild west full of ghosts, zombies and all different kinds of spooks.


Ryan: First off, how did you guys get your start in the comic book industry?
Chris: With Reed Gunther! This is our first series we've worked on although we've done other smaller projects in the past and are always working on side projects together and individually. I also do comics for a group called "Heeby Jeeby Comix" where myself and three other cartoonists (Bob Flynn, David DeGrand, and Dan Moynihan) create weird fun comics. I also work in animation and Shane does a lot of writing and working on films so working on comic books isn't too much of stretch in another direction for us.
Shane: It's true! Chris and I started with the first issue of Reed, REED GUNTHER AND THE STEAK SNACKING SNAKE! We originally self-published in black and white for four issues. We submitted Reed Gunther to Image and they decided to reprint our self-published issues in color and continue the series!
Tell us a little about Reed Gunther.
Shane: Reed Gunther is a goofy, bear-riding cowboy who bumbles his way through fighting some of the most ferocious monsters in the wild west. It's chock full of adventure, fun, and some spooky bits! 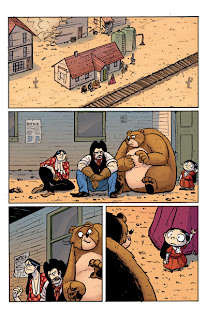 What is it about RG that makes it an all ages comic and not a kids comic?
Shane: We're not writing down to a specific audience. We're both in our 20's and we want to be creating stories that we think are funny, scary, and exciting. It just happens that there's nothing overtly objectionable in the book to exclude a younger audience. So it's not a kids book, but instead and adventure book that anyone can get into. Kind of like how Star Wars and Indiana Jones are exciting adventure stories that kids and adults both dig, but they're not marketed as "all-ages". All-ages does not mean "for kids".
Chris: Kids comics are aimed at and are for kids. All ages comics are aimed at readers of all-ages. This group does contain kids (maybe 8+?) but it's not "kiddie material." We probably need a new term for it instead of saying all ages. It sounds too much like "fun for the whole family!" But it's hard to say who will enjoy Reed Gunther and who won't. We've met kids who love it and kids who couldn't care less about it. We've met edgy teenagers or older men that enjoy the series which always surprises me. Quite a few mid-aged women have approached us at comic conventions to tell us how much they enjoy Reed Gunther and that's so cool to hear.
Have you drawn inspiration from any other books specifically?
Shane: I'm usually most influenced by whatever I happen to be currently reading! But when I'm looking to the pros for some inspiration, I like to read stories by John Layman, Ian Boothby, John Arcudi and Ed Brubaker's creator owned stuff.
Chris: I love artists like Jordi Bernet, Guy Davis, Darwyn Cooke, Jack Davis, and Peirre Alary as well as a slew of animation artists. I'm always influenced by whoever I'm reading but some of it shows up in my work more than others. 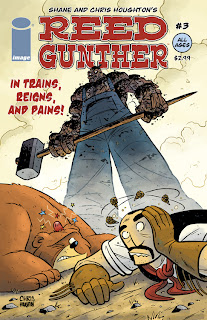 Is it is it difficult to walk the line between both target audiences?
Chris: Not really. It's not like we have to constantly stop Starla's breasts from falling out or stop Reed from murdering children. It's a light-hearted book and it's fun to keep it that way.
Shane: One time Chris and I had a conversation about whether Reed should stick his pistol in a zombie-fied version of John Henry and blow the back of his head off, or if Reed should punch John in the face so hard his neck snaps and falls off. That's about the only time we thought one of those two versions were too violent for what we're going for. The result is in issue #3.
There has been a great deal of conjecture of late about all ages comics and their importance in the future of the industry. What are your thoughts on the matter?
Chris: It's tough because everyone says they want more all-ages comics but then you look at the sales for all-ages books and they're in the toilet. Everyone says we need to get kids to read comics and everyone agrees but it's tough. Comics are too expensive for kids to buy and are hard to find which doesn't translate well into sales for kids. Plus, if you do want to sell comics to kids, you're most likely selling comics to their parents. This usually means you need to sell licensed material of a popular brand so that the parent knows what they're buying. That said, even a lot of those licensed comics for kids do not sell well.
I hope there's room for more non-superhero or non-gore fest books out there. There's nothing wrong with those kinds of books (I read and enjoy plenty of them) but I do wish the market was a little more supportive of different kinds of books. All-ages is a tough label because it can alienate your audience. Merge that with the false notion of "all-ages" means "for kids" and you've got an uphill battle. It'd be great to see the American market become a little more like Europe's or Japan's. Almost everyone reads manga in Japan from kids to senior citizens. Plus, there are books to fit everyone's interest which is something we're lacking in American comics.
The thing that keeps Shane and me going is the fact that the people who do read Reed Gunther really enjoy it. We may have a small following but they're a loyal bunch and that makes all the difference in the world. We're very thankful for that.
Shane: Yup. Chris nailed it. We're very grateful to our awesome fans out there who have given Reed Gunther a chance. We hope more people start seeing Reed Gunther as a fun adventure book rather than a "kids book". We're not writing down to a certain audience, we're creating fun and exciting stories that people like us (dudes in their 20's) would want to read!
Issues 1, 2 and 3 of Reed Gunther are in stores now.
Check out the boys websites at ChrisHoughtonArt.com and ShaneHoughton.com
all ages comics chris houghton Comics Image Interviews Reed Gunter Shane Houghton