First things first, this movie really isn't as bad as people say. It certainly isn't perfect but it's really not bad.

The latest foray into the DC Universe by big hitters Warner Bros introduces us to Hal Jordan (Ryan Reynolds), a test pilot with some serious daddy issues. After a particularly hard day at the office, Jordan is enveloped in a green light and whisked away before happening across a downed space ship and its dying crewman Abin Sur (Temuera "Jake The Muss" Morrison). After a bit of explanation it turns out that Abin Sur is a member of the Green Lantern Corps, a type of intergalactic Police Force that draw on the power of green rings and the power of "will" to overcome evil. This is a big budget action movie with some really stellar effects and a sound effect board that must have melted down on numerous occasions.

Although not a bad movie, Green Lantern did somewhat miss the mark. It introduced us to a massive cast of incredibly interesting characters such as Sinestro (Mark Strong), Tomar Re (voiced by Geoffrey Rush), Kilowog (voiced by Michael Clark Duncan) and the freaky demon/octopus Parallax (voiced by Clancy Brown) but then all but dismissed them. If there is one thing I can't abide it is the under utilisation of Geoffrey Rush! (You have one of the greatest modern actors on contract, USE HIM!) We are taken to Oa and introduced to the enormity of the Green Lantern Corps and the near omnipotent Guardians but then spend the rest of the film in the fictional Coast City on Earth. These incredibly imaginative creatures and epic settings are instead traded in for a small town bar, a Dodge Charger and Blake "not so" Lively. The incredible effects shown during battles on Oa and the sheer scale of its surroundings were really something to behold. If only this had of been the focus. The overall mish mash seems to be a result of the long and drawn out screen play writing process which involved Greg Berlanti, Michael Green, Marc Guggenheim and was eventually rewritten by Michael Goldberg. 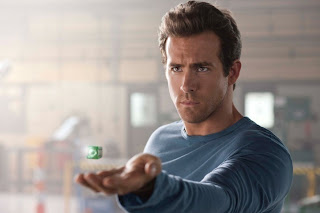 Some strong performances assisted in raising the bar overall. Ryan Reynolds is the embodiment of the handsome and cocksure Jordan, cementing his a-list status while Peter Sarsgaard was equally awkward and menacing as the socially inept Dr Richard Hammond. Blake Lively on the other hand is anything but. At no point does she convince me that she is an elite fighter pilot nor the VP of a weapons manufacturer. She made me feel as though I had autism, at no point could I tell what emotion she was expressing, perhaps because at no point did her forehead move. Another under utilised talent was our New Zealand brethren Taika Waititi, writer, director and star of "Eagle Vs Shark" and last years brilliant "Boy". If nothing else, hopefully this will mark the beginning of a suitably wonderful career for Mr Waititi. As said before, a lack of screen time for Strong and Rush is a disappointment but will no doubt see them return in the inevitable sequel.

After much public grumbling about Jordan's suit, it's really not so bad. The fluctuations of light were at times distracting but it is certainly not the worst comic book costume I've ever seen, at least it didn't have nipples. The constructs that Jordan creates with his ring are awesome and the glimmer of hope that keeps me interested in the sequel. This film has nearly made its money back already so yes, there will be a sequel. A "training" scenario between Sinestro and Jordan shows just how fun this film could, and should, have been. 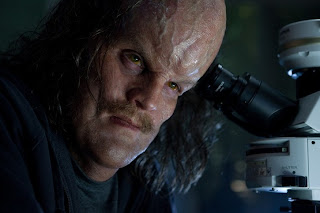 Is this film a masterpiece, nope, although it is very well shot by Aussie cinematographer Dion Beebe and New Zealand Director Martin Campbell does a good job with the story that he was given. It is, however, a good fun popcorn movie with some big bang moments and a glimpse into the brilliance that it could have been. Overall, I found Green Lantern to be a fun, pretty and action packed film. There is some good action and explosions for the boys and a fair bit of Ryan Reynolds with his shirt off for the girls. If you are looking for a good fun popcorn flick and the chance to experience one of DC Comics lesser known heroes, then Green Lantern is for you.