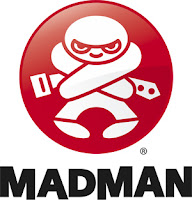 November is my favourite month. It just so happens to be the month of my birth AND what seems to be the biggest month of releases from Madman this year.

There is something for everyone with new releases of Bleach and Dragon Ball Z as well as the latest K-On! and ... *squee* GUUNNNNDAAAAAMMMMMU! So hold tight until November 16th and save your sheckles. For the full line up, have a look at Madman's website.

The Adventures of Tintin:

I grew up watching Tintin after school on the ABC and reading every one of Hergé's comic books from the school library. So it goes without saying that I am super excited to see this released in a complete collection and on BluRay, no less!

"Reporter by trade, adventurer and detective by circumstance, Hergé's Tintin is one of the world's most popular and best-loved comic book characters. Starring the eponymous hero, his dog Snowy and a support cast including the likes of Captain Haddock, The Thomson Twins and Professor Calculus amongst others, The Adventures Of Tintin is guaranteed to delight longtime Tintin fans."

The Disappearance of Haruhi Suzumiya:

Haruhi Suzumiya arrived in Japan like a tornado. Manga, anime, character goods, CD's and light novels have flown off shelves, devoured by rabid and ultra loyal fans. Yours truly is one of those fans. Offering a great blend of slice of life and supernatural with a healthy serving of humour as one would expect from the S.O.S.

"On December 17th, Kyon's life was abnormal: he spent his free time with an alien robot (Yuki), a time traveler (Mikuru), and an ESPer (Koizumi), trying to keep a headstrong classmate (the eponymous Haruhi) entertained so that she wouldn't unintentionally destroy the world. On December 18th, Kyon's life becomes...normal. Haruhi has disappeared as if she never attended their high school. Yuki is now a shy bookworm, Mikuru has lost all memory of Kyon, Koizumi is nowhere to be found, and only Kyon can see that things have changed. Now he has to decide whether he'll fix it or not."

Based upon the 1996 manga series by Yasuhiro Nightow and subsequent anime in 1998, Trigun - Badlands Rumble takes place after the events of the anime series. With animation provided by Madhouse, there's no doubt that it will be an absolute feast for the eyes.

"Vash the Stampede is a gunslinging, red-trenchcoat-wearing drifter with a giant bounty on his head. His biggest threat, however, may not be law enforcement, but an outlaw by the name of Gasback. Twenty years ago, Vash accidentally interefered with one of Gasback's robberies, and now the villain's back with a score to settle. Gasback has come to Macca City in hopes of stealing one of their major installations, and Vash has just coincidentally arrived at the same spot. Also involved in this caper are a beautiful lady with a grudge, a couple of insurance agents, and Vash's old buddy Wolfwood. At first it seems that Gasback has succeeded, but one can never underestimate Vash's legendary abilities—not to mention the secrets that his allies have up their sleeves."

Whisper of the Heart:

Yet another rerelease in Madman's stable of Studio Ghibli titles on BluRay. It will be interesting to see how Whisper of the Heart scrubs up under the HD treatment considering that it is one of Ghibli's older films.

"Shizuku Tsukishima is a bit of a book-worm, spending her last summer vacation in junior high school reading and translating popular foreign music into Japanese. With aspirations to one day become a writer, Shizuku can't help but notice that the name Seiji Amasawa appears on every one of the books she borrows from the library."

For those who have been reading my reviews lately, you would be aware that I fell in love with K-On! Volume 1. So its no surprise that I am just as excited to see volume 3. I just have to see volume 2 first and then I'll be set...

"When Yui joins the Light Music Club. She becomes the guitarist in this all-girl high school rock band with Mio Akiyama on bass, Tsumugi Kotobuki on keyboard and Ritsu Tainaka on drums. Together, they’re going to rock the school and someday make it to the Budokan! But they have a new member Azusa officially joins the club, but is shocked to find everyone drinking tea and eating cake instead of practising."

All I really know about Baka and Test is from what I saw during the Madman panel at the Sydney Manga and Anime Show. From what I did see, it looks like bundle of hilarious insanity in the same vein as Excel Saga.

"When a fight breaks out at Fumizuki Academy, nobody throws a single punch. Instead, the students utilize the school's technology to summon Avatars, pint-sized stand-ins with battle powers based on academic ability. That "academic ability" part is bad news for Yoshii: he's an idiot, stuck in lowly Class F with the slackers. If these misfits want to escape their dump of a classroom and earn some respect, they'll have to fight their way up the ranks and take on Class A, the Academy's brightest students. It's going to be tough, that's for sure, but once the underachievers of Class F get motivated, they don't give up - and Yoshii can't even spell surrender!"

At the fault of one particular person at Madman (you know who you are) I have become a gigantic Gundam addict. Anime, manga, Gunpla (models) and art books have all been collected in an extremely short period of time. So this month, not only do we get the oldest and original series but the newest and most advanced. It's a great month to be a Gundam fan!

"With Banagher Links as its master, the Unicorn Gundam goes into action. The mobile suit that is said to be the key to Laplace's Box offers a glimpse of its incredible power in single combat against Marida Cruz and her Kshatriya. After the battle, the Unicorn Gundam is captured by the Londo Bell warship Nahel Argama. Also aboard the ship are Micott, Takuya, and Audrey, who have been rescued by a Londo Bell pilot named Riddhe Marcenas. Full Frontal, leader of the Neo Zeon remnants known as the Sleeves, launches an attack on the Nahel Argama with his mobile suit Sinanju in order to obtain the Box. Frontal, the so-called "second coming of Char Aznable," claims to be a vessel embodying the hopes of the Spacenoids. What will happen when he encounters Banagher on the battlefield?"

As I said before, its a great month to be a Gundam fan. It is a fantastic opportunity to see where it all began with Japan's most successful anime franchise of all time.

"The year is 0079 of the Universal Century, the Earth Federation and its space colonies are engaged in an apocalyptic war. The rebellious Principality of Zeon, using humanoid fighting machines called mobile suits, has all but vanquished the Federation. Now the Federation's last hope is the prototype mobile suit Gundam. When a twist of fate makes young civilian Amuro Ray the Gundam's pilot, his own battle begins - a struggle not only for the Federation's survival, but for his own."