Before you even bother reading further. Answer me these riddles three:
Do you like anime?
Do you like zombies?
Do you like big boobs?
If you answered yes to at least 2 out of 3, you'll love High School of the Dead.
"A deadly new disease is ravaging the world, turning the populace into mindless zombies, and the number of infected is skyrocketing by the second. As their fellow classmates and teachers succumb to the infection around them, a small group of students at Fujimi High School are fighting for their lives after surviving the initial outbreak. It is up to Takashi Komuro to unite the group of weary survivors and try to escape the horrors that surround them. In this new world of the living dead…will they escape?

High School of the Dead is by Director Tetsuro Araki (Deathnote, Black Lagoon), animated by studio MADHOUSE and adapted from the highly successful manga of the same name by Daisuke Sato." 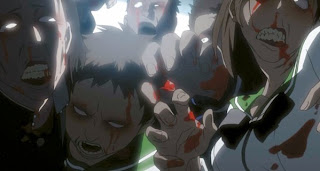 In a way, High School of the Dead is a throwback to horror and the zombie sub-genre films of the 1980's. The violence is just as overt and plentiful as the T&A. I generally moan and groan about fan service when it is gratuitously thrust in your face but in this case its so tongue in cheek that I can't help but love it. Sure, H.O.T.D isn't going to win you over with a deep and meaningful plot or terribly complex characterisation but it delivers just as much as you should expect.
The character types are more or less the anime archetypes that we all know and love. A tough high school everyman, a beautiful but dim witted teenage girl, a sexy but stupid school nurse and a tough and a hapless nerd turned hero. These characters could have been drawn out of a hat and actually feel like they were. That said, have you watched many zombie films? Take Zach Snyder's "Dawn of the Dead" for example. You have the tough black cop, white jerk-off who you wish would die, empathic plain Jane girl and a sexy 20-something who gets her boobs out at every opportunity. I mention this only to highlight the fact that if its okay for Hollywood to use a set group of stereotypes, I won't hold it against the anime world. 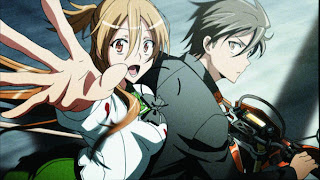 So no, the characters don't exactly break new ground but they are a fun bunch. The artwork, however, is of fantastic quality. Everything from film grain tarnished suspense sequences to first person chase scenes and a blood spattered camera lens are lifted from the zombie sub-genre bag of tricks. The zombies obviously got plenty of attention and are distinctive, menacing and grotesque. They force our characters to quickly branch out from their high school and into the suburbs, giving the animators a chance to create what is a very realistic setting... except for the flesh eating undead. Action scenes are very well animated, bloody and brutal. Every action sequence is larger that life and extremely over the top. One case in particular sees a bullet fly in slow motion between the cleavage of one of our heroines. Now I'm no Physicist, but I'm quite sure they should not move like that, nor should they make "boing" sounds. In moments like these I couldn't help but roll my eyes while still laughing about how ludicrously gratuitous the whole thing is. The standard of animation throughout High School of the Dead is as fantastic as you would expect from a superstar studio such as Madhouse. 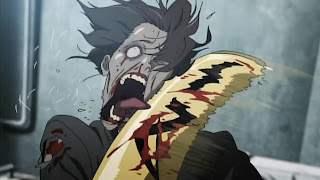 High School of the Dead's soundtrack is for the most part unremarkable but shines with the eponymous opening theme by Kishidakyodan and the Akeboshi Rockets. This sets a good pace for each episode and its actually a pity that they weren't used a little more. The closing themes are different with every episode. All performed by Maon Kurosaki they supply a more subdued tone and convey the despair of our heroes.
Sure, High School of the Dead may do little more than adhere to the well established conventions of the zombie apocalypse genre, but is that such a bad thing? I'm surprised that it has taken so long for the anime and world to create a series which is so firmly set in the zombie apocalypse survival genre. That said, its a fun romp into the gratuity and absurdity of the genre and shows just how far it can be pushed when given the anime treatment. I really enjoyed this series and unashamedly so.
High School of the Dead is available on DVD and Blu Ray from Madman now.
Still not sold? Well you can watch the first 2 episodes online for FREE at Madman!
Anime Blu Ray Daisuke Sato Highschool of the Dead Madhouse Madman Reviews