Released last week by Madman, Dance in the Vampire Bund takes place in modern day Japan. Opening on the set of a Japanese light entertainment show, the Queen of the Vampire's comes out to the world announcing that not only do they exist, but they are deeply entrenched in society.

"After millennia in hiding, Mina Tepes, Queen of the Vampires, suddenly appears in Japan to announce the existence of vampires and establish a colony for her blood-sucking brethren. After this landmark announcement, Akira Kaburagi's world will never be the same. As a boy, Akira vowed to serve the ruler of the night, and now he must fulfill his destiny by protecting Mina from those who would dethrone her!"

Produced by studio Shaft and directed by Akiyuki Shinbo, Dance in the Vampire Bund is based upon the controversial manga series by Nozomu Tamaki. Like all good vampire tales, Dance in the Vampire Bund is a sexually charged story about Mina Tepes, Queen of the Vampires, and her trusty yet amnesia afflicted minder, Akira. Sparks fly between these two much to the chagrin of Yuki who also has her eye on the hunky dream boat. It's pretty much a textbook love triangle apart from the fact that Mina is trapped in a her prepubescent body, belying her actual age. This is where things get a little bit... wrong. There's plenty of nudity and fanservice in this series. Sadly, the majority of it comes from Mina. I'm no prude and I don't particularly dislike nudity, but the naked body of a... let's say 13 year old... just doesn't sit right with me. I'm actually very surprised that it made it through the censors. That said, if you can get past this, Dance in the Vampire Bund strikes a good balance of horror gore, action, politics and sexuality. The basic elements of all good vampire series. 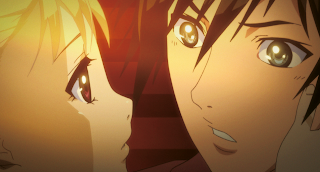 The animation, supplied by animation studio Shaft, is of a good quality and reasonably consistent. With previous titles such as Mahoromatic and This Ugly Yet Beautiful World have been enjoyable, yet the animation seemed to waver between great and just passable. Vampire Bund, however, is of a good quality overall. The character designs aren't exactly awe inspiring but I found this to be somewhat of a blessing. With the sheer amount of characters, it would have been all to confusing if each one of them were entirely fleshed out, both visually and in terms of characterisation. The action is electric and makes great use of the supernatural characters and their various powers. 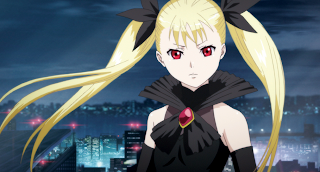 Another thing that makes Vampire Bund stand out is the use of black. Solid blocks of black and dark hues give a Gothic feel to what is, essentially, modern day Japan. That's not to say that the colour palette consisted of tones and not colour, quite the opposite. Maroon, dark green, bronze and navy blue fill the backgrounds and set the tone for each scene instead of just washing out in grey and black. The picture quality in Madman's release is fantastic quality, crisp and clean. The audio is well balanced but the English dub seems to be a touch more vibrant than the Japanese voice over. 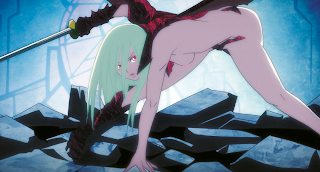