Thankfully, Madman have scheduled more than enough anime for an October release to keep us geeks occupied. Check out a few choice cuts of what's being released next week and leave us some comments, let me know what you want to, or will be getting from this awesome list!


The second and final film in the Eden of the East series hits our shores and is guaranteed to arrive with a bang. Mr. Outside's game is coming to a head and is sure to raise just as many questions as answers. The high stakes political intrigue continues with "Paradise Lost".
"Accused of terrorism and feeling the heat, Saki's high-tech crew is in the crosshairs. Meanwhile, the shroud of mystery covering Takizawa is lifted as he and his fellow Selecao make their final moves. Every game must come to an end. For those playing Mr. Outside's twisted game of conspiracy thrills, the end comes now."


From the creator of Akira... what else is there to say?

"In the 23rd century, mankind has fled Earth and emigrated to the moon. The last outpost of civilization is the Lunar Republic of Eden, where the omnipresent Citizens Administration Council grants residents everything they need. But what do you do when you discover everything you believe is a lie?

A single photograph with an inscribed message found inside a rocket launched from Earth leads a group of young men to question the counsel ruling the seemingly utopian city. But what length will they go to discover the true meaning of Freedom?" 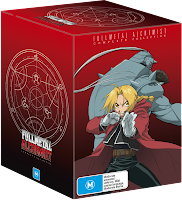 
The brothers Elric made alchemy cool. No longer was is it relegated to bearded swindlers and renaissance ragamuffins. Now you can get all 51 episodes, the feature film and OVA collection in one tidy little package.

"Innocence and flesh were sacrificed when two young brothers ignored the laws of alchemy in an attempt to resurrect their mother. The horrors they recklessly unleashed that night marked the beginning of a journey that leads from darkness to light and back.

In an era of war and corruption, State Alchemist Edward Elric and his brother Alphonse desperately search for the Philosopher's Stone. The legendary artifact is their last hope to restore what was lost - or it could be their undoing. The grisly truths found in the quest for the relic will test their souls in ways unimaginable.

Murder stalks the brothers from the shadows and false prophets conspire to steal their faith. Morality is assaulted by military atrocities and scientific abominations. Amid the ashes of their childhood, Edward and Alphonse will discover the power to create is but a breath away from the power to destroy. The bond of brotherhood will be their greatest weapon in the fight for their lives.

This set contains the entire 51 episode TV series, 2 disc edition of the Fullmetal Alchemist movie as well as the Premium OVA collection across 16 discs." 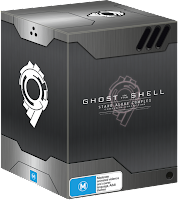 Everyone loves Ghost in the Shell, right? The majority of anime fans that I know say that their first experience with anime was watching Major Motoko Kusanagi bust skulls in her camouflage underoos. Many years later she reignited our screens in Stand Alone Complex, a series that delved deeper into questions about humanity, the human soul and what it means to be alive. Whoa... deep...

"The television series based on Masamune Shirow's Manga and Mamoru Oshii's highly influential film, 'Ghost In The Shell: Stand Alone Complex' takes viewers to futuristic society where technology has saturated citizens' daily lives. Along with the new technology comes new types of crime that exploits it, but female cyborg Major Motoko Kusanagi and her team of police, Section 9, devote their lives to chasing criminals, both on land and in cyberspace."

I have been champing at the bit to get my grubby little mitts on the second series of 00. After seeing the destruction of Celestial Being I have been surmising over how they are going to regroup and rebuild and what direction they will take from there. What made it worse is that I haven't been able to watch "A Wakening" yet!

"The year is 2312 A.D.; four years after the United Nation forces destroyed Celestial Being. Thanks to the actions of the now-missing Gundam Meisters, most of the world's nations have been unified under the Earth Sphere Federation. But this world is still full of conflict, and an autonomous peacekeeping force known as the A-LAWS employs brutal tactics such as the use of murderous automatons in order to suppress all resistance to the Federation government.

It is time for the Gundam Meisters to make their second advent, and their new objective is to crush this formidable force of global oppression. Setsuna reappears with his battered Gundam and joins forces with Tieria, who has been working with the remnants of Celestial Being to create a new series of Gundams using their precious solar reactors. As they try to recruit a new member and rescue an old comrade, a revolutionary new machine known as the 00 Gundam is about to awaken."

I'm sorry, all I heard was Tokugawa Shogunate, alternate reality and something about pretty girls...

"The story takes place in Japan in the early 21st century, in an alternate reality where the Tokugawa Shogunate has remained in power. In this reality, student councils are tasked with oppressing schools. Yagyuu Muneakira is a high school student who rebels against his student council with the help of girls who've had the names of famous samurai heroes passed on to them."
Anime Blu Ray DVD Madman News October