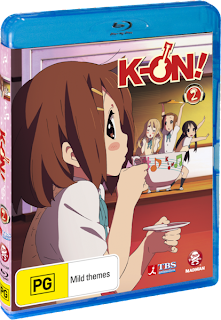 Anyone who happened to read my review of volume 1 can pretty much guess what this review is going to say. So smitten was I that you could very well stop reading now. But don't! At least follow on after the jump for a look at the official trailer!

"As the Light Music Club rehearses for their performance at the school festival, they realize that they're not officially registered as a club. They need to quickly find a faculty advisor, but that's not something that a little blackmail can't fix. As their new club advisor, Miss Yamanaka coaches Yui to become the frontman of the band and pushes her to the point of losing her voice. Mio is forced to be the lead vocalist in her stead, but can she overcome her stage fright?


Later, the Light Music Club celebrates Christmas with a party and gift exchange, and soon another school year begins. If they want the Light Music Club to live on even after they graduate, they're going to have to recruit new members, and that means another performance at the freshman reception!"


K-On!, as we know, is about a High School "Light Music Club" and the series itself follows very much the same ethic. It is some very easy watching. There's nothing by way of high drama, plot twists or even character development. It really is an easy to watch, slice of life series that has a strangely hypnotic effect. From a logical stand point, it shouldn't be as enjoyable as it is... but it is. Much of its charm and allure stems from a great bunch of characters that are incredibly well balanced. There is no one who is unlikeable, no villain and now that I think of it... no males! 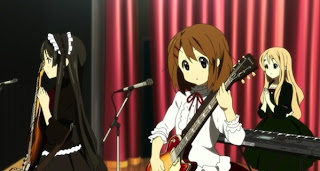 There isn't much character development to speak of although we do manage to find out a little more about Yui and it turns out that it would be impossible to know Yui without knowing her younger sister, Ui. In this volume we see a lot more of Ui as she steps up into the big leagues and joins Yui in High School as a freshman. It is in these moments that we realise that Ui, although younger in age, is much more senior than her years imply. We are also introduced to Asuza, a young and curious girl who seems intrigued by the Light Club and its crazy members. Finally, we learn more about Ms Yamanaka and a deep, dark secret that she has been hiding from the world for so many years. 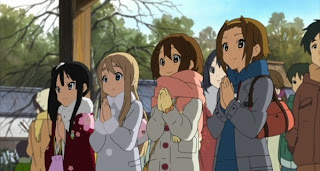 Don't expect thrills and chills from K-On! because you simply won't get it. If there are any small twists they are all in the name of comedy and as such, hilarity ensues. This is simply one of, if not THE most fun series I have watched in a very long time. It has managed to capture the fun, characterisation and comedy of the manga perfectly. In a way, it has also managed to flow similarly to the manga which is a four panel comic strip style approach. The anime manages to bring across this feeling in quick skits which come together to form the story. The music, as expected, is brilliant. The girls give their first performance to a rousing applause from their high school comrades (and me). I am still completely addicted to the opening and closing themes "Cagayake! Girls" and "Don't Say Lazy". It's such a pity that these songs aren't available on a soundtrack or even on iTunes. 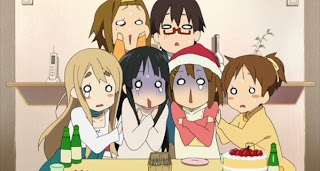 Thankfully, by the time I managed to dedicate the time to watch K-On! volume 2 I realised that it will *only* be another month before volume 3 is released! It's been a while since I was so enthralled with a series, I forgot how much it sucks to wait for the next volume to be released.
K-On! Volume 2 is available on DVD and Blu Ray from Madman now and volume 3 is available for pre-order!
Judging by the international response and sales figures, I'm guessing that I'm not the only person who loves K-On! If you've watched it, loved it or hated it, let me know in the comments below.
Anime Cagayake Girls Dont Say Lazy k-on Light Music Club Madman Review Reviews