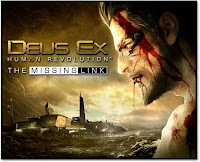 Deus Ex: Human Revolution is one of the best games that I have played this year. Everything just fell into place and worked well. The puzzles were tricky but not impossible, the upgrade system was in depth but not confusing and it balanced the stealth and run'n'gun gameplay perfectly.

I f you want more Deus Ex you're in luck. a DLC pack called "The Missing Link" will scratch that itch. Follow on after the jump to check out a walkthrough narrated by game designer Antoine Thisdale.

"Narrated by Game Designer Antoine Thisdale, this walkthrough of The Missing Link offers a deeper look at the gameplay. After a perilous escape from his Belltower captors, Adam Jensen manages to escape the cargo ship on which he is trapped. What he doesn’t know yet is that the ship has docked onto a secret Belltower seabase. He will have to uncover this base’s deepest secrets if he hopes to make it out alive."