The polar opposite of their flagship title, Sonic The Hedgehog, is one of Sega's most successful game franchises YAKUZA!
There was only one way to make Grand Theft Auto cooler, set it in Japan. Thus leaving us with Yakuza. How can you make Yakuza even cooler? ZOMBIES! That is exactly what Sega have done with Yakuza: Dead Souls. Released in Japan in June this year, us unlucky gaijin will have to wait until March 2012.

OFFICIAL PRESS RELEASE:
WHAT WAS ONCE OF THE END IS NOW DEAD SOULS
SEGA Delivers the Unique Experience of Tokyo’s Red Light District
With an Undead Twist in Yakuza: Dead Souls Coming 2012!
Thursday 6th October 2011 – SEGA® Europe Ltd. and SEGA® of America, Inc. today announce that the much requested ‘Yakuza of the End’ will be available in the West from March 2012. Renamed ‘Yakuza: Dead Souls’ this iconic Japanese series will be available exclusively to PlayStation® 3 owners and will feature the entire storyline and a brand new mini-game Pachislot!
Yakuza: Dead Souls brings the Yakuza back to Kamurocho, the famous red light district of Tokyo, which is under attack from hordes of zombies. Players will not only face armies of the undead and incredibly powerful mutants; the treacherous Japanese underworld is just as merciless. Playing through the eyes of four of the most revered members of the series, witness allegiances shift quickly and the line between friend and foe lost. If you thought zombies were bad…meet the Yakuza! 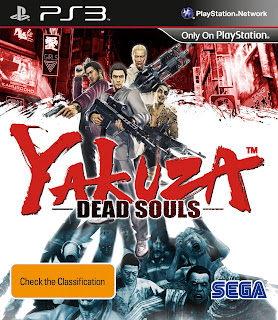 “We know how much people love Yakuza in the West and with Dead Souls being the latest and greatest in the franchise its only right we bring it to them closer to the Japanese release than ever.”– said Gary Knight, Senior Vice President of Marketing at SEGA.
Yakuza: Dead Souls features gunplay for the first time in the Yakuza series, where everything from pistols, machine guns and rocket launchers can be employed against your enemies. Just remember to save some ammo in case you run into something more terrifying than zombies! With all the depth and story of a Yakuza title, plus the addition of exciting shoot-outs and previously unplayable characters Ryuji Goda and Goro Majima,  Yakuza: Dead Souls is worth dying for.
For more information please visit www.sega.com/yakuza/
Games News Sega Yakuza Zombies