Making its Australian premiere at the Japan Foundation's 15th Annual Japanese Film Festival, Buddha: The Great Departure is an animated retelling of Osamu Tezuka's manga "Buddha" which ran for 14 volumes between 1972 and 1983. Although best known as the creator of Astro Boy, Tezuka was a prolific manga creator who often created stories that were much more dark, and sometimes disturbing, that our favourite little robot boy. The manga, and more importantly the film, is a gritty insight into what life may really have been like once the rose coloured glasses of religion are removed. Traces of sex, violence and a great deal of prejudice give sense of realism and weight to what would become the great Buddha's journey.

Although not always as dark as the source material, Buddha: The Great Departure takes us into a world that is just as barbaric and magical as any fantasy world.

There are very little changes or omissions between the film and the manga and rightfully so. Given that the source material is based upon religious text and teachings, there's not too much that you could change before it became a Buddhist anime version of The Life of Brian. Thankfully, being as true to the text as it is, Buddha manges to show how ugly life could be in ancient India, reinforcing the amazement that such a beautiful and peaceful religious movement could have sprung from the ashes. The film does lose certain thematic elements although retains the overall plot of the anime. 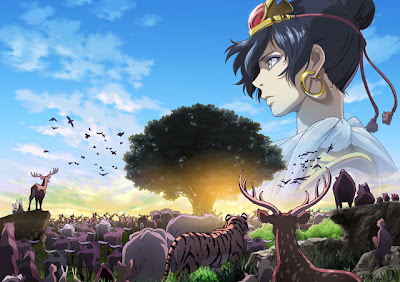 The animation quality is wonderful and captures the majesty of ancient Indian royalty and the harrowing destruction of war perfectly. So high is the quality of work that it is easily comparable to Disney or Ghibli, adding to the overall visceral experience. This is surprising as Toei, although a powerhouse of animation in their own right, are better known for their work on One Piece, Dragonball and Digimon. Sadly the comparisons to the legendary Studio Ghibli end there. Toei and director Yasuomi Ishito don't quite manage to capture the magic that is evident in Tezuka's work. That is in no way slander against Ishito's name as I severely doubt that anyone would be up to that task. That being said, they manage to depict the scale of key scenes perfectly.

The vocal cast is strong and give performances that would be worthy of a live action production. Both Sayuri Yoshinaga (About her Brother) and Masato Sakai (Abacus and Sword)  give vibrancy to characters that deserve no less. The score that accompanies the film also manages to capture the epic feel of the story with a melange of strings and orchestral roar in all the right places.

Overall, Buddha: The Great Departure is more or less on the money. It is as faithful to Tezuka's vision as you could hope and a visual spectacle to boot! Fans of Tezuka's manga should be happy with the end result and those who are uninitiated will no doubt be left wanting more. This film, although animated, is not specifically for kids and would be better left to the tween/young adult crowd. Think less My Neighbour Totoro and more Princess Mononoke. If you do have younger kids, however, Studio Ghibli's Arrietty and Takashi Miike's Ninja Kids!! would be perfect.