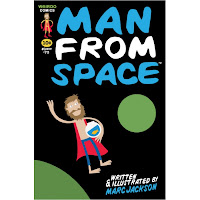 From the mind of Marc Jackson, an award winning* cartoonist, comes Man From Space. The "*" following the "award winning" statement is an absolute must as without it, people would be at risk of believing it. Alternatively you could read said statement, not believe it, yet still find yourself pondering if there was something that you missed... something that required a higher level of brain function to properly receive and digest this piece of high art. In short, you don't and you didn't.


"Join MAN FROM SPACE and his sidekick Michael the goldfish on an intergalactic adventure, unlike no other. A mind-blowing romp into outer-space insanity awaits you in issue 1, of a 4 issue limited series. If you thought you'd seen it all, er... think again, because you haven't. Unless you've already read this and so you probably have... er, I digress. Ok, back to the description... MAN FROM SPACE - The intergalactic adventures of an outer-space asshole! It's what your eyes were made for. Read on adventure fans, read on!"

Man From Space is comparable to me at karaoke. I know I'm not great and I don't pretend to be, I'm there to entertain with some light hearted fun and generally raise at least a giggle.

You really need to approach this book with an open mind. Is it good? Well... that depends on what you are looking for. The illustration is crude and repetitive and the constant 3-panel layout does nothing to inspire interest through diversity. None of the characters are fleshed out and there is nothing in the way of back-story to speak of. Our main character and his pal Michael manage to find their voices rather quickly, although the auxiliary cast feel as though they're floundering. Sound pretty crap? Well, its actually not! Like I said before, its certainly not a masterpiece but thankfully its not trying to be. It's not a 60 year old woman wearing skinny jeans and a boob tube but instead Man From Space is an overweight 30 year old wearing a Muppet Babies t-shirt, comfortable in his own skin.

Tapping into the absurd, this book raises chuckles through a smattering of surreal humour. Literary non-sequitur abound through conversational banter between our protagonist and Michael, his trusty sidekick who just so happens to be a goldfish. I'm in no way worldly enough to make such an assertion, but I will... surreal or absurdist comedy has always appeared to be closely bound to "English humour". Monty Python, The Goodies and more recently The Mighty Boosh have all embraced the absurd, the loony and the silly within and turned it into something that transcends nincompoopery and arrives somewhere high brow. In no way would I compare Man From Space to Monty Python, he's not the messiah. But I can see where Jackson was going with this book and in embracing the silliness, I found it to be an enjoyable little read.

Jackson seems to be poking a little bit of fun at himself with the "award winning cartoonist" line. He's warming up the crowd by stating "I'm no Chuck Jones, but lets have some fun".