Gantz the film is based upon the wildly successful Gantz manga and Gantz anime series created by Hiroya Oku. This is one seriously whacked out thrill ride. Luckily, or possibly unfortunately, the film is MUCH more tame than the manga and anime. There is a good chance that if it was kept panel for panel true, it would almost certainly have been refused classification.
Kei, a socially awkward college student stumbles across an old friend at a local railway station. Next thing he knows he is helping his friend save an old drunk from an oncoming train which doesn't stop in time and kills Kei and his school friend Kato. Strangely, the boys find themselves in a white room, seemingly alive. Tasked with the destruction of alien invaders, Kato and Kei must hunt down strange creatures in a sadistic and bloody game of cat and mouse. You either win your life back or die trying.


The overall tone of the film is as dark as its colour palette, which is expected when you're watching a film about a literal game of death. I'm completely up to date with the Dark Horse releases of the manga and have also watched the absolute balls-to-the-wall action of the anime as released locally by Madman (who are also releasing the film next month), and in a sense, I think that it spoiled the film a little. Not only did I know what was coming, but what was coming was very much toned down from the source material. The film completely dispenses with the overt sexual nature of the film and settles instead for sexual frustration which makes it feel as though our main protagonist, Kei, is being tortured on all fronts. My recommendation would be to watch this film (and the sequel) before delving into the source material and not the other way around. 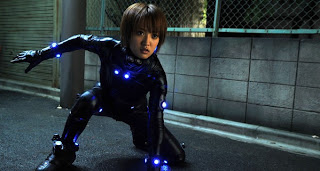 Director Shinsuke Sato is no rookie when it comes to action with Princess Blade and my favourite JFF film from last year, Oblivion Island, under his belt. The action takes a while to heat up but when it does it is a blood pumping onslaught of head exploding alien firearms and katana craziness. This is well balanced with a frustrating love triangle that nearly everyone can relate to (he loves her but she loves that other guy and the other guy is a dope!). Sato manages to ground the film with such human reactions in what are some completely inhuman situations, without which, the human element would have been lost. 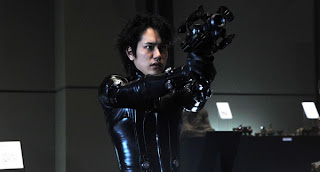 Kei is played by Kazunari Ninomiya, a super star of the Japanese pop on silver screen who is probably best known to Western audiences for his role in Clint Eastwood's Letters from Iwo Jima (he also stars in The Lady Shogun and Her Men, an adaptation of Fumi Yoshinaga's manga Ōoku also at the JFF!). Ninomiya manages to portray in manner that makes him less and less likable as the film progresses yet never letting him get to the point that you wish he would fail. Kenichi Matsuyama plays our other lead in Kato. Matsuyama is best known for his role of L in the Death Note films and in this instance he is just as great. He plays a stoic counter to Kei's intensity and reveals a dark past that grounds him every day, a shame that pushes him to be a better man. These guys are two of Japan's biggest young actors and I suspect that we will be seeing a lot more of them in coming years.
Gantz is a fantastic popcorn film that raises some serious questions of morality by asking the question "how far would you go to live?". Gantz will leave you wanting more and ends with very little by means of resolution so do yourself a favour and buy tickets to see Gantz and Gantz: Perfect Answer (Part 2) back to back.
For American cinemas, this film was dubbed into English and from all reports, it was awful. It pleases me immensely that The Japan Foundation in all of their wisdom have decided to show the film with its original Japanese soundtrack.
If you missed it at the cinema, Gantz is available now on Blu Ray and DVD from Madman.
Gantz Japan Foundation Japanese Film Festival Kazunari Ninomiya Kenichi Matsuyama Movies Review Reviews