This is where it all began. Undoubtedly the most successful and perhaps the most significant anime series of all time, Gundam is so much more than just another franchise and is as popular now as when its eponymous series was released in 1979. Filled with action, political intrigue and social commentary Mobile Suit Gundam (機動戦士ガンダム) is to Japan as Star Wars (or Star Trek) is to the West.

"The year is 0079 of the Universal Century. The Earth Federation and its space colonies are engaged in an apocalyptic war. The rebellious Principality of Zeon, using humanoid fighting machines called mobile suits, has all but vanquished the Federation. Now the Federation's last hope is the prototype mobile suit Gundam. When a twist of fate makes young civilian Amuro Ray the Gundam's pilot, his own battle begins."

Before MSG came other legendary robot properties such as Osamu Tetsuka's Astro Boy, Mitsuteru Yokoyama's Tetsujin-28 and Go Nagai's Mazinger-Z. The latter aren't terribly well known here in Australia but were certainly a product of post-war Japan's love affair with technology, the industrial robot and a burgeoning industrial revolution. After the war ended, Japan entered an era of growth as industries kicked back into gear and the country was rebuilt. In doing so, the Japanese government embraced industrial robots in an attempt to match or even surpass the West. So began Japan's long and detailed love affair with fictional robotic protagonists. 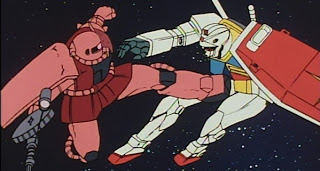 As far as animation goes MSG is certainly showing its age but at 32 years old that's certainly no negative indictment. For its time, MSG is very well animated and manages to offer some wonderfully iconic scenes that have been replicated in nearly every Gundam series since. If you're unable to swallow the ageing animation you'll still be able to appreciate the complexities of this politically rich series. In fact, the great thing about the Gundam franchise is that it can be appreciated on so many different levels. If you want to watch some giant robots smack down, you've got it. If you want a more complex story about factional governments and the growth of modern day terrorism, you've got it. For me, MSG is a series that spoke of the state of Japan in 1979, an industrial revolution and the memories of child soldiers that were still fresh in the minds of many. 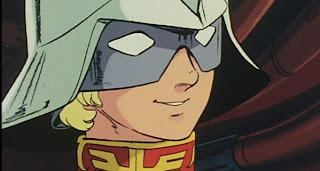 The characterisation of 15 year old Amuro Ray is a commentary on post war teenage rebellion in Japan. The 70's were a time of burgeoning ideology within Japanese youth. No longer guided by the old school ethics, it was a whole new world were people were in a position to decide for themselves what was right, wrong or other. This is reflected in Amuro's attitude toward the war, although now inextricably linked to the Earth Federation and their war against the rebel alliance, the Principality of Zeon. He starts off as a reluctant member of the Federation's team although as the war progresses he becomes much more willing a participant before eventually relishing the thrill of war. This in itself isn't unheard of in wartime where paradoxical psychology flourishes. 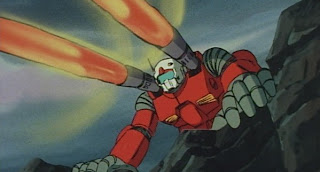 Mobile Suit Gundam is a classic series that is a must see for all Gundam fans. Don't let your love of Gundam start and finish with Gundam Unicorn and Gundam 00. This is where it all began, the beginning of the "real robot" genre. A series that is just as relevant today as it was in 1979, an absolute treasure that is equal parts anime series and time capsule.
Mobile Suit Gundam collection 1 is available on DVD from Madman now. Collection 2 is available for preorder and will be released in February 2012.
Amuro Ray Anime DVD Gundam Madman Mobile Suit Gundam Review Reviews