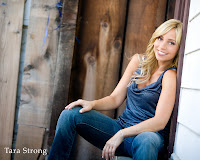 Tara Strong is one of those names that pops up at the end of countless animated series such as Ben 10, Teen Titans, Batman: Brave and the Bold and much, much more. Most recently she entered our homes in the guise of Harley Quinn in Rocksteady Studio's best selling game, Arkham City.
Tara took time out of her busy schedule, during the holiday crunch no less, to fill us in on the voice over biz and her time as everybody's favourite sassy Psycho, Harley Quinn.

Ryan: Today I have the pleasure of speaking to one of the hardest working actors in the biz, Tara Strong. Before we get started, I'm very reluctant to call you a voice actress because you seem to be just as at home in front of the screen. Do you have any preference between voice work and on-screen live action roles?
Tara Strong: I really love doing both! There are many fun, fantastic, wonderfully creative things about both.
We most recently heard your voice as the maniacal Harley Quinn in "Batman: Arkham City", is it fun to play a villain?
Playing Harley was incredibly fun and challenging. I love Arleen and what she brought to the character, so honoring her vision and making it my own was something I did not take lightly. With that said....being the bad girl is always fun.

Harley is a fan favourite character but she's often written off as somewhat of a bimbo. What approach did you take when voicing a psychiatrist turned psychopath?
I don't see her as a bimbo, I love that she is a hopeless romantic and will do ANYTHING for her love. It's so entertaining to witness a character like her. She has the ability to be a psycho and endearing.
Was it at all daunting to take over the role from the original Harley, Arleen Sorkin?
I was BATGIRL alongside Arleen doing Harley, and I always loved watching her. She is so beautiful and talented. Without Arleen, there would be no Harley. Obviously I did not want to disappoint the fans or her.
What is the best thing about doing voice work?
I love being creative and being able to play an enormous variety of characters, ones that I might never get to play in real life....Although I think I would make a pretty fun Harley! Voice acting is fun too, because a lot of the time; you get to work with and play off other actors, and to be very honest, voice over greats are the most interesting, talented, beautiful people you'll ever meet.
Do you have any tips for people who would like to get into the voice over industry?
I always suggest to get into as many acting classes as you can, it really is about acting; not a funny voice. Improv classes, singing lessons, scene study, and if there is a fantastic voice over class in your area, you should definitely go for it. You can also check out all my tips at www.voicestarz.com.
Arkham City Batman Games Harley Quinn Interview Interviews Tara Strong