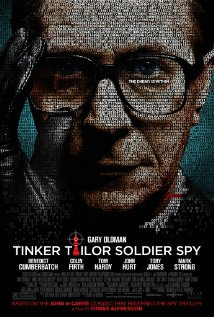 view Tomas Alfredson (Let the Right One In), Director of the new film Tinker Tailor Soldier Spy, recounted a conversation he had with John Le Carre in which he attempted to describe his trepidation at making a film adaptation of the legendary authors work. John Le Carre quickly put him at ease when he explained the simple fact that no matter how the film turned out, his novel would live on unaffected. This meant that the director had the ultimate freedom because there is no way the source material could be damaged. This is an interesting way to see a film adaptation, it shouldn't so much be a case of capturing every aspect of the book because to do that the film would have to be sixteen hours long and the film making would suffer accordingly, it's not the role of the film to retell the story. The film should convey the essence of the book and in doing so bring the book to a new audience. This book has already been adapted for the screen when it was made into a television series starring Sir Alec Guinness

Tinker Tailor Soldier Spy is set in and around the British Secret Service affectionatley called the 'circus' during the height of the cold war. We meet the Control (John Hurt) as he is retiring from his role as the head of the circus, we are introduced to his closest and most respected wise men of the intelligence world Percy Alleline (Toby Jones), Roy Bland (Ciaran Hinds), Toby Esterhase), Bill Hayden (Colin Firth) and George Smiley (Gary Oldman). Control explains that he and George Smiley will be retiring together, a fitting exit for two men who gave so much for their country. Sadly the retirement is cut short when George is summoned back into the service to find a Russian spy in the circus. What ensues is a delicate game of cat and mouse which will take George through many dark avenues of the secret service and intelligence community alike.

This film belongs to Gary Oldman, as he gives a masterclass in understating. Every movement, every look and every word he utters is calculated and he never wastes a second of screen time. It is a genuinely absorbing performance and one that I have no doubt will feature in the Oscar nominations. Gary Oldman is in a rare class of actors that can always lose themselves in their character, I never see any of his past performances when he is on screen, for instance this character is not unlike Commissioner Jim Gordon in the Batman films but they feel like different men who exist in different worlds, as they should. His performance is helped greatly by the likes of Colin Firth who once again shows why he is at the peak of his powers. John Hurt is excellent as always which sadly isn't enough praise but the man just has the bar set higher than most and never fails to bring gravitas to the screen.

The stand out performances from the old firm in the film are supported exceptionally well by the new plucky 'young' kids of British cinema namely Mark Strong, Tom Hardy and Benedict Cumberbatch (Sherlock Holmes in the BBC series). Each bring a different flavour in terms of their acting style but more importantly their physical presence. Tom Hardy is a man who commands attention whereas Benedict Cumberbatch has more feminine qualities both qualities are essential in the story telling.

As this film is set within the British Secret Service, it is almost impossible not to imagine the likes of James Bond walking around. It would be interesting to see a Bond film shot in this period given the outstanding costume and set design, there are no fancy 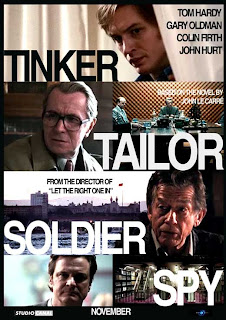 computers around or high tech equipment, just the bare bones of the times. This is really a strength of the film. The music selections were perfect, either to lighten to mood or to drop a dollop of irony onto the situation.

Tinker Tailor Soldier Spy shows us the harsh realities of the democratic society. In order to have peace there must be sacrifices and we need people who are strong enough to make these sacrifices. George Smiley is a fascinating character in the John Le Carre universe in that he is a phenomenal detective who never lets himself get easily led and follows the clues to unravel the mystery, however he is vulnerable and known for being blinded by his emotions and sense of duty.

This film is an example of what happens when a creative director is given outstanding source material and the finest acting talent, the result is a complex and fascinating film which is simply a must see for the season.
Benedict Cumberbatch Colin Firth Gary Oldman Mark Stron Movies Review Reviews Tinker Tailor Soldier Spy