- January 17, 2012
I didn't think it was possible. I swore to myself after "Fear Itself" I would pass on any upcoming event titles, and then this happens. Avengers Vs X-Men is shaping up to be a tremendously fun event in contrast to the brooding that overwhelmed Fear Itself.

To make things even better, Bendis will be in Australia for Supanova when this comic drops! Grab a copy, get it signed an pick his brain when in Melbourne or the Gold Coast. AvX has
Check out Jim Cheung's cover after the jump!

"This April, prepare for the biggest super hero war in comics history as Marvel is pleased to present your first look at the jaw-dropping cover to Avengers Vs. X-Men #1 by superstar artist Jim Cheung! From the powerhouse creative team of Brian Michael Bendis, Jason Aaron, Matt Fraction, Jonathan Hickman, Ed Brubaker, John Romita Jr., Adam Kubert and Olivier Copiel comes a groundbreaking event pitting Earth’s Mightiest against the X-Men with the entire Marvel Universe at stake. Cyclops and his team believe the arrival of the Phoenix Force will save mutantkind, but Captain America is convinced it will destroy the world! But who is right? Don’t miss out on all the action in Avengers Vs. X-Men #1 in comic shops worldwide and on the Marvel Comics app this April!" 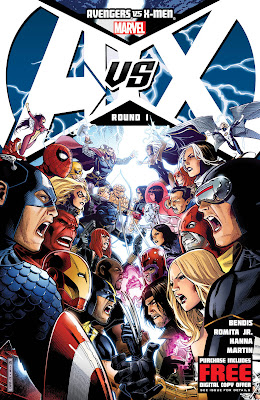